Vast geothermal reservoirs remain unexploited in the world due to their location in or beneath ultra-hard rock. When present, these layers of ultra-hard rock must be penetrated at depths of up to several kilometers. Current technology for drilling at this depth and hardness uses a roller cone or polycrystalline diamond compact (PDC) drill bit. Mechanical cutters are used to cut the rock, and the mechanically-fractured cuttings are removed to the surface using a flow of drilling “mud”—a water- or petroleum-based cocktail to transport the cuttings and manage formation pressure. These drilling operations cost in the millions of dollars to conduct, especially when the drill bits must be replaced often prematurely after operation in hard or abrasive rock. Additionally, drilling can take up to an hour to drill through just a few feet of rock with the typical need to drill through 100-500 or more feet of hard rock at well depths of up to 15,000 ft.

According to a U.S. Geological Survey (USGS) report, there is enough geothermal energy resource in the United States to provide 517,800 megawatts of baseload geothermal electrical power[1].  However, much of this geothermal resource lies in or beneath very hard, low-permeable rock (sometimes greater than 30 kpsi unconstrained compressive strength). Currently, there are no drilling technologies that can economically exploit this hard rock resource.  Laser technologies that could offer faster and more efficient drilling options have been contemplated for some time. Until recently, laser drilling was i) incapable of penetrating beyond low lengths of rock; ii) unable to be delivered downhole because of laser conductance issues from surface levels down to the bottom hole assembly; and iii) not portable given large sizes and the precision alignment procedure of the laser. Recent advances in laser power transmission through fiber optic cables show great promise in delivering the required power at long distances down deep boreholes. This is a result of both the availability of cheaper and more powerful lasers as well as drastic cost reduction in fiber optic costs over the past 15 years, down from $1,000/W to less than $50/W. By combining powerful new laser and transmission technologies with conventional drill bits, an opportunity opened to exploit new geothermal resources. 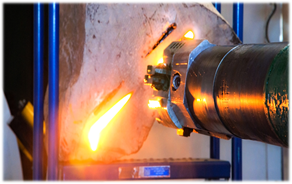 The overall goal of the Foro Energy team was to develop a world-first hybrid laser-mechanical drill assembly technology (Figure 1)[2]. The approach was to combine a rotating drill bit with a new laser transmission system to project laser radiation onto the rock surface while rotating. This kind of rapid heating fractures the rock, allowing a drill bit to remove rock cuttings from the rock surface, which exposes the next rock layer to be fractured by the laser.

To address the challenges, the engineers at Foro made significant advances in laser transmission technology. This included hardened optics, low-loss rotating optical connectors and fiber optics for the harsh downhole environment. The Foro team used its world-first technique to suppress stimulated brillouin scattering (SBS)[3]. If unchecked, SBS will attenuate nearly all transmitted power at the frequencies and intensities being employed with this system.  The dispersed power could easily destroy the fiber optic as well as the laser itself.

Figure 2: On the left, hardware image of the downhole laser connector, 0.75 inches in diameter and 8 inches long; on the right, illustration of the Optical Slip Ring (OSR), which allows the spooled fiber to be coupled with the rotating fiber optic, carrying power down the hole.

One of the key innovations of the Foro team was a high-power optical connector to couple the armored fiber optic cable transmitting power from uphole to the downhole beam shaping optics just above the drilling surface (Figure 2) that provides a uniform energy over the borehole surface. The connector successfully delivered 20 kW laser power to the downhole tool in the borehole at high ambient temperatures and in a high-shock environment, following aggressive testing of up to 24 hours at 400oF and vibrational forces of 200 g.

One of the other notable innovations of the team was coupling the laser-power from the fiber optic cable as it unwinds from a storage spool to the fiber optic cable in the drill string, which is rotating. This was achieved using a novel optical slip ring (OSR) (Figure 2) that optically couples the external fiber across a rotary joint to the optical fiber that carries the laser beam downhole. Precision rotary design enables over 20 kW of laser energy to be coupled from a laser input to the rotating fiber optic cable, with rotational speeds up to 5 rpm. The combined advances in drill bit and laser technologies support accessing next-generation energy resources in a more timely and cost-effective manner.

During its ARPA-E project, Foro Energy demonstrated a world-first ability at surface to drill hard rock at 10 ft/hr over multiple hours of operation on test bedrock, as well as project 20kW laser energy for 12,000 feet distance in a rig-hardened fiber optic cable. While actual downhole tests were not carried out at this stage, the ARPA-E project opened the door to applications in drilling geothermal wells, and a novel technique for safe oil and gas well completion.

The combined advances in the hybrid laser and mechanical drilling technologies could support accessing next-generation energy resources in a more timely and cost-effective manner.

During the performance period with ARPA-E and subsequently, Foro Energy has received investments from a number of investors, including but not limited to North Bridge Venture Partners, Presidio Capital, Formation 8, Chevron Technology Ventures, Energy Technology Ventures, and ConocoPhillips. The DOE Geothermal Office also recently funded a project for $3.5 million with the company to further develop its technology for geothermal borehole applications. The Foro team is also collaborating with Sandia National Labs in a separate Geothermal Office-funded project to validate and establish proof of concept for low weight on bit (WOB) drilling technology to be utilized in microhole (i.e., inches in diameter) drilling. Microdrilling methods aim to substantially lower geothermal well evaluation and monitoring costs.

Foro Energy has also moved its focus from research to development in collaboration with the company’s target customer base for additional applications beyond drilling.  In addition to their original research facility in Denver, Foro now has offices in Houston, TX, Bakersfield, CA and a test well in Galveston, TX. As a first market, the team currently aims for its first product to be utilized in the closure and decommissioning of oil and gas wells, with initial sales forecasted in 2016.

Foro Energy's technology could be a key enabler of economic access to megawatts of baseload geothermal electrical power.  According to Foro’s estimates, laser drilling could drop the cost of geothermal plants by up to 29% overall, since most of the cost of these plants is in drilling the wells themselves. In addition, Foro’s technology could provide the world with a more efficient method of sealing oil and gas wells while at the same time preventing  potential environmental damage.

As of May 2016, this project has reported 41 invention disclosures to ARPA-E, 26 non-provisional U.S. Patent and Trademark Office (PTO) patent applications, and 18 U.S. PTO issued patents.

The Foro Energy team has also published the scientific underpinnings of this technology in the open literature. A list of publications resulting from this project is provided below:

[3]SBS is a nonlinear scattering phenomenon that is driven by a positive feedback mechanism induced by the interaction of laser light with the fiber optic cable.  Specifically, intermolecular forces act as a grating for transmitted light and a scattering event results in a wavelength-shifted light signal that deposits heat into the fiber.
File Download