Achieving widespread adoption of hybrid electric and electric vehicles (xEVs) requires substantial improvement in battery performance while also reducing the cost of the battery system. Although it is essential to minimize the volume and weight of the battery systems, the batteries used in today’s xEVs are one and a quarter to two times larger than actually needed to power a vehicle. The reason for this oversizing is that today's battery management systems (BMS) have limited information on the state (state of charge, state of health, and state of power; generally referred to as “SOX”) of the many individual cells that make up the battery. As a consequence, a safety margin of unused capacity must be built in. To obtain more value from both present and future batteries, innovations in BMS are needed to monitor the batteries, and optimize overall battery performance, longevity and safety and thus allow more complete use of the available capacity.

Traditional BMS use a small number of sensors connected by electrical wires across the battery pack. Due to the fact that sensor placement and wiring adds weight, cost, and complexity, battery packs typically utilize a small number of sensors, preventing individual measurements of the cells. Advances in sensor technology, and the transmission and analysis of signals now make it possible to revisit the traditional design of BMS and develop more complete, cell-level sensing in simpler, lower cost systems. 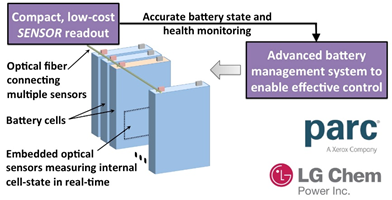 The PARC team proposed a transformational approach to battery management based on fiber optic (FO) sensors. PARC’s newly developed low cost, high accuracy FO wavelength shift detector was a key enabling technology for the project. The technical benefits of this approach include the intrinsic electrical isolation of an FO system, the variety of sensing modalities possible (strain, temperature, etc.), the capability to multiplex multiple sensors along the same FO cable, and the potential to collect data from all the cells rapidly. Preliminary assessments indicate the potential to reduce system cost by 10 – 15% and trim pack oversizing.

The PARC team has developed embedded FO sensors, demonstrated their embedding into the electrode stacks of large format xEV-grade cells, and completed initial demonstration of SOX estimates in initial module-level tests across various xEV use cases. The project team has also prototyped and tested the optical monitoring system that enables comprehensive battery pack performance management. Their prototype BMS, applied to a battery system with more than 25% oversize, reduced pack weight by 5% and cost by 10%.

Cost analysis of a representative xEV battery system shows that PARC’s optical sensor technology can allow downsizing of the battery pack to save hundreds of dollars in the cost of battery cells while at the same time bringing down the cost of the BMS itself. There are also significant safety and performance benefits for a BMS employing an all-optical sensor and communication technology that does not require electical isolation and is not subject to electrical noise.

In October 2015, PARC along with their partner LG Chem Power, Inc. and a new auto original equipment manufacture partner initiated testing and evaluation of the SENSOR system’s application to a plug-in hybrid electric vehicle module. This module will contain more than 24 large-format Li-ion cells, and will undergo a number of pack-level load cycling simulations as well as shock and vibration experiments to prove out system worthiness for this auto industry partner’s future xEV models. 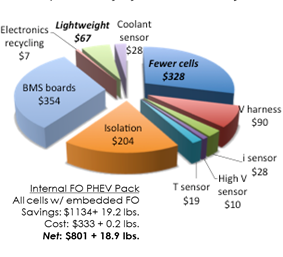 PARC’s technology, while developed for initial use in xEVs, will also be applicable to batteries for grid storage and other advanced energy storage applications. The use of optical fibers, which remove the need for electrical connectors for sensors and communications in the BMS, will provide a special safety benefit in high voltage and other critical high-energy density systems.

While the initial application is for existing Li-ion batteries, the improved controls are likely to be even more valuable in future batteries with new chemistries that support higher specific energies. These new batteries are likely to require improved BMS to maintain performance and safety. PARC is working on applications of its SENSOR system for such developmental battery research.

The dominant cost driver for EVs is the energy storage system, and a U.S. Advanced Battery Consortium analysis sets targets of $125/kWh cost and a specific energy of 250 Wh/kg to make EVs economically competitive.[1] Despite rapid progress, EV-grade lithium-ion batteries still cost about $400/kWh with specific energy less than 150 Wh/kg according to worldwide industry estimation in 2014, with industry leaders driving costs down toward $300/kWh. The PARC BMS has demonstrated potential to support both cost reductions, and increases in specific energy beyond those that will be delivered with continuing improvements in battery chemistry. By enabling significant improvements in battery size, performance, and safety in electric vehicles, PARC’s technology could potentially promote greater adoption of hybrid and electric vehicles, as well as support the growth of grid-level energy storage based on batteries.

The PARC team has also published the scientific underpinnings of the SENSOR technology extensively in the open literature.  A partial list of publications is provided below. Further information on the project is available at www.parc.com/sensor.