Biofuels offer renewable alternatives to petroleum-based fuels that can reduce net greenhouse gas (GHG) emissions dramatically. Even with the expected improvements in electric vehicle technologies, liquid fuels are likely to remain in significant niches within the transportation sector. Today’s vision for cost-competitive domestically produced biofuels are hampered by three key issues: 1) Crops intended for biofuel production require large tracts of arable land that may compete with food crops; 2) Biomass is not easily digested and requires an expensive or inefficient process to breakdown into its components; and 3) Oil-rich crops do not provide enough energy yield per unit area to be a cost effective alternative for production of transportation fuel at scale.

Advances in plant biology have shown that the non-protein amino acid, gamma-aminobutyric acid (GABA) rapidly accumulates in plant tissues in response to biotic and abiotic stress, and regulates plant growth. GABA has been observed to increase the sugar content in grapes when applied exogenously, and in canola engineered to have increased GABA levels. The potential to increase sugar content would be particularly attractive for sugarbeets, which produce high levels of fermentable sugars per acre and are easier to convert into biofuel than starch from corn grain. GABA appears to play a role in nitrogen metabolism, subsequently if GABA regulation can also be used to reduce fertilizer usage in the field, this would lead to less N2O greenhouse gas emissions and nitrogen run-off.  A feedstock that produces similar levels of fermentable sugar as corn, but with reduced agronomic inputs, would qualify under the Renewable Fuels Standard as an advanced biofuel and enjoy market benefits over corn grain ethanol. 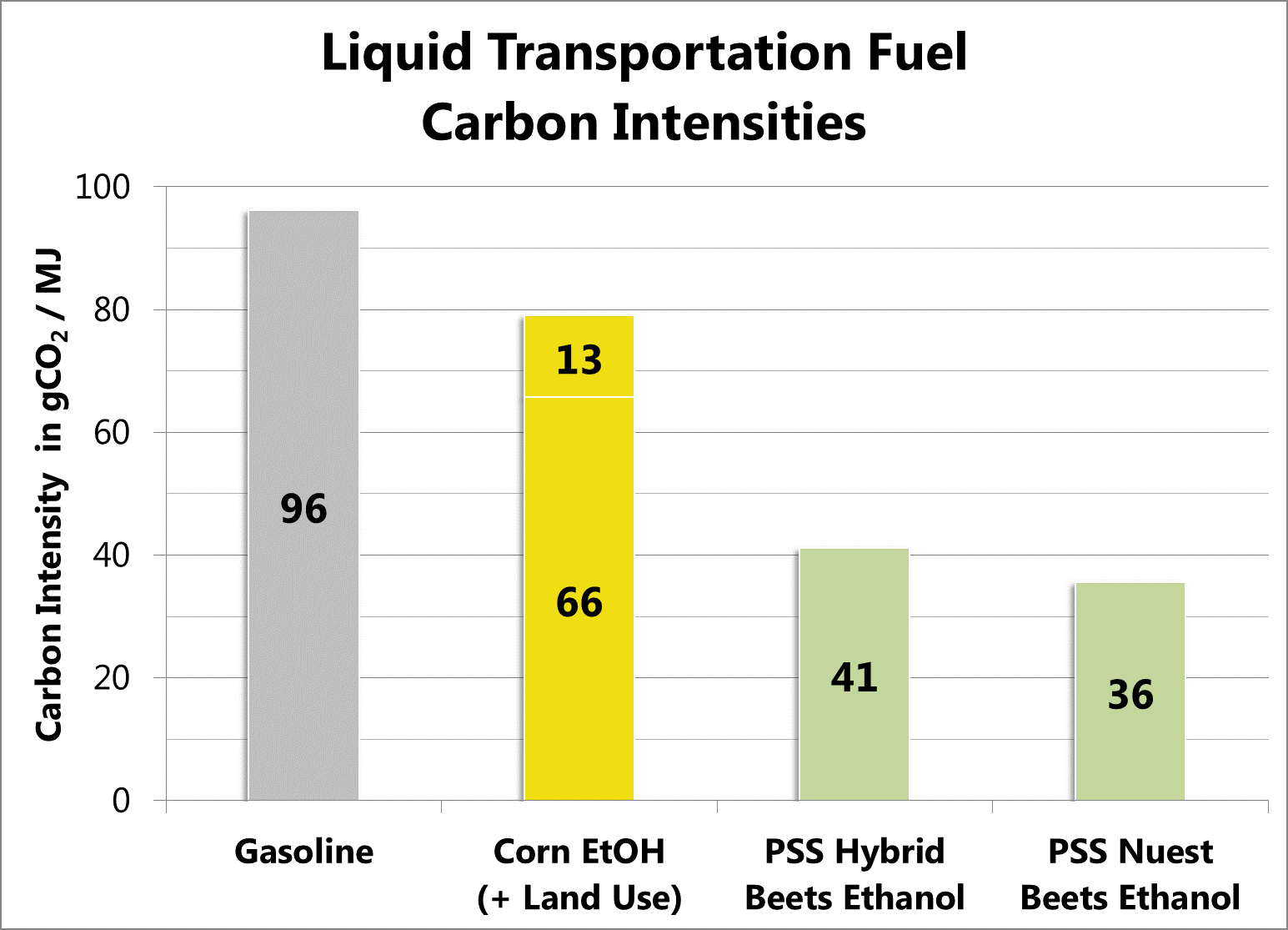 Plant Sensory Systems’ (PSS) project goals were to increase sugar yield from beets by 30% over standard beet sugar yields today (4.98 tons/acre) and reduce the amount of nitrogen fertilizer needed.  The PSS team’s approach was to use their proprietary promoters and genes that, when expressed in plants, increase GABA production and yield a Nitrogen Use Efficiency and Stress Tolerance (NUEST) trait.

PSS introduced its proprietary NUEST genes into sugarbeets and evaluated the trait phenotype in the greenhouse under controlled conditions. The best performing NUEST plants had both significantly increased brix (free extractable sugars) and root biomass compared to control beets. On average, the best NUEST lines yielded approximately 40% more sugar per plant under laboratory conditions. Experiments to quantify the effect of the NUEST trait on nitrogen-based fertilizer use efficiency were initiated in early 2016.

In addition, PSS made a NUEST gene construct that does not contain any DNA elements that would be regulated as transgenic by the U.S. Department of Agriculture, and transformed this 'commercial' construct into beets.  If successful, this approach would avoid the lengthy and costly regulatory approval process required for the transgenic beats.

PSS developed a method for inducing flowering in sugarbeets that reduced the time to generate seed by one year versus conventional growing processes. This method allowed the plants to generate sufficient seed to plant small field plots in Colorado in 2016 and bulk up enough seed to plant several field trials in the Fall of 2016.

To determine the best first market opportunity, PSS worked with North Dakota State University (NDSU) on a techno-economic analysis (TEA) for different regions of the United States.  The best rate of return to growers was projected for the Southeast due to low land costs and favorable environmental conditions. With this insight, PSS focused its efforts toward developing non-transgenic beet hybrids optimized for growth in the Southeast. Small-scale field trials of hybrids developed with traits optimized for growth in the Southeast were started in early 2016 in Florida to assess field performance, and to introduce Florida citrus growers to a new crop rotation.  Once validated in the field, the commercial NUEST trait will be incorporated into these hybrids to increase the sugar yield of the crop.

Supported by data from early field trials and economic models, PSS has identified grower-investors who will install supporting beet ethanol fermentation facilities starting in 2017. PSS has spun off a startup company ‘Just-Beets’ with a commercialization plan offering a sustainable value capture and commercial ramp up of the early-stage bioenergy R&D supported by ARPA-E.

Based on the experimentally validated NDSU model, the expected beet yield in Florida is 38 tons of beets producing 783 gallons of ethanol per acre, 60% greater than existing ethanol yields from corn grain. The co-produced beet pulp fulfills a shortage of cattle feed caused by the declining availability of citrus pulp and also adds additional economic value.  Building on the local agricultural community’s support, this PSS beet technology could provide up to $568 million in replacement economic value in Florida for the 500,000 acres currently fallowed by Citrus Greening, a disease of citrus caused by a vector-transmitted pathogen.

The focus on building a stakeholder network in a primary market (e.g. Florida), with a compelling value proposition, is a model for the successful introduction of new bioenergy crops into complex feedstock supply chains.  Subsequently, the PSS team is creating additional economic activity in several more U.S. states with field trials in Alaska, Arkansas, Maryland, and California.

The second important impact from the ARPA-E funded technology is an opportunity to expand a biofuel industry that: does not compete with staple food products; produces up to 60% more ethanol per acre than corn grain; and significantly lowers the carbon intensity of biofuel.  For example, the calculated carbon intensities (CI) of the new PSS beet crops are 41.2 gCO2/MJ for the hybrid beets and 35.6 gCO2/MJ for NUEST.  The hybrid beet CI in the Southeast is 57% lower than the 96.2 gCO2/MJ of conventional petroleum fuels and 48% lower than corn grain (Figure 2), qualifying the technology for advanced biofuel certification (application under EPA review).