To realize the benefits of wide-spread electric vehicle adoption, battery size and cost both need to be reduced to provide a driving range of at least 300 miles at a price competitive with conventional vehicles. Changing the composition of batteries to include different chemicals that can provide higher energy density (the amount of energy relative to the size of the battery), is a technology focus for addressing this challenge. However, each new chemistry brings new challenges to the battery design. One promising approach, that could increase the energy density of lithium (Li)-ion batteries as much as 40%, is to use silicon as the active material in the negative electrode (anode). Unfortunately, the reactions of lithium and silicon cause severe swelling and contraction of the silicon anode material as the battery charges and discharges, and this has defeated previous attempts to create such a battery. These challenges have hindered the introduction of silicon in Li-ion batteries, and if they could be overcome, it would provide a real opportunity for increasing the capacity of Li-ion batteries.

By controlling particle structures at the nano-scale through recent advances in materials synthesis, scientists are now able provide unique opportunities to address the silicon anode challenge. In particular, a broad range of synthesis techniques have been emerging that allow tailoring particle size, pore size, chemistry, and surface properties of silicon-based composites. These synthesis techniques provide a potential platform to engineer Si-based structures with the ability to manage the volume changes during reaction with lithium, while also minimizing deleterious surface reactions. 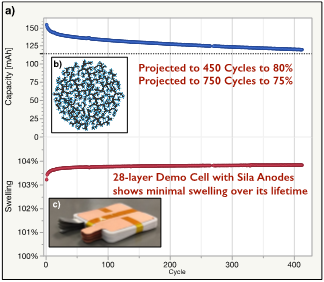 The Sila team has used a unique approach to exploiting nanostructured materials to enable stable cells with silicon anodes. In 2010, members of the Georgia Institute of Technology project team published their work in Nature Materials (Magasinki et al.) showing that a nanostructured silicon-based particle could be synthesized, coated with carbon, bound with the traditional anode binder polyvinylidene fluoride (PVDF) and used in a half cell to reversibly cycle lithium ions.

In 2011, Sila Nanotechnologies Inc. was founded by a team of Silicon Valley entrepreneurs in collaboration with the Georgia Institute of Technology to continue this research and development (R&D). Further evolution of this material concept resulted in building novel composite anode powders, where a silicon-comprising porous core was encased in an ionically conductive shell. In this particle architecture, silicon can accept lithium without inducing significant particle expansion during charging. In addition, these micron-sized composite particles exhibit small outer surface areas in contact with electrolytes, which minimizes undesirable side reactions. The outer shells allow for rapid conduction of lithium ions, while also preventing uncontrolled reactions between silicon and the liquid electrolyte. In this manner, a vast portion of silicon’s specific capacity can be realized without inducing rapid cell degradation. Sila’s advanced synthesis methods allow the engineering of such nanocomposites, and then production of these micron-size composite powders at the kilogram scale with a path to production at the ton scale.

During the ARPA-E-funded development project, Sila reproducibly manufactured thousands of ~10 mAh single layer pouch cells and now has initial 100-200mAh multi-layer demo cells capable of retaining 80% current capacity after as many as 400-600 cycles at C/3-C/2 rates. The company’s original R&D scale reactors allowed for up to 100g (~150Ah) of anode material production per day. Sila has completed the design and nearly completed construction of a pilot scale reactor to produce their proprietary silicon-based anode material at a scale of kilograms per day.  Additionally, Sila has since completed construction of a robot assembly unit to make stacked pouch cells.

Sila's on-going silicon anode project seeks to make the first batteries with stable silicon anodes that can cycle for hundreds of times while staying within industry durability, performance and cost specifications.

Sila’s first commercial deployments in portable consumer electronics are targeted to start in 2017, followed by larger format pouch cells for automotive applications in 2020-2022. Specifically, these forecasted dates are aided by sizeable private investment from financial investors, including top-tier venture firms Matrix Partners and Sutter Hill Ventures, as well as industrial partners in both the consumer electronics and automotive spaces.

Today’s commercially available lithium-ion batteries for electric vehicles cost about $200/kWh at the cell-level, with pack costs of $300/kWh. At these levels, a battery pack that can deliver sufficient energy for a 300-mile range (85 kWh) would cost roughly $25,000. Widespread adoption of electric vehicles will require battery cells with more than double current state-of-the-art energy densities (1,000 Wh/L) at a third of the cost (less than $100/kWh). Plans for manufacturing scale-up of Li-ion batteries to 35 GWh/year may bring costs down to less than $200/kWh.

When a silicon-based anode replaces the graphite in today’s Li-ion batteries, a cell energy density of 1200 Wh/L becomes possible when coupled with advanced cathode materials. Sila’s anodes have the potential to reduce the cell cost to less than $100/kWh, a target that would support electric vehicle goals. Such a battery would also be cost competitive for grid applications, including renewable energy storage. The planned commercial deployment and testing of the new technology will be an important step in developing the experience base needed to incentivize uptake in electric vehicles and grid applications.

More general, the strategy of encapsulated nanostructures can be broadly applicable to other battery chemistries and possibly other industries as well: the nanostructuring addresses mechanical failure while encapsulation minimizes surface side reactions.