Over the past 50 years, the growing use of air conditioning has resulted in a significant increase in the use of electricity and water. In the United States today, the electricity required to cool residential and commercial buildings accounts for 6% and 8% of total electricity production, respectively. Additionally, standard air conditioners transfer heat from inside to outside a building, exacerbating external heating that can contribute to the urban ‘heat island’ effect, where the outside ambient temperature is higher than that in surrounding rural areas. Technological innovations in cooling systems are needed to improve energy and water use in buildings, and reduce CO2 and other harmful emissions associated with cooling.

Due to the fact that light and heat are linked, changing the optical properties (such as color) of surfaces can in principle both reflect unwanted heat and help dissipate heat by emitting it in the form of infrared radiation. New advances in materials science and engineering now make it possible to create structured materials tailored to reflect sunlight very strongly while simultaneously emitting infrared light. This enables a concept known as daytime radiative cooling. It has long been known that radiative cooling is possible at night because it transfers heat from relatively warm terrestrial objects to the extreme cold of deep space. But this counter-intuitive concept – that an object under full sun can be made to be cooler than its surroundings – was not practical before the development of new methods that allow the control of the radiative properties of materials.

Figure 1: Demonstration of how photonic structures can be used to cool a building, and a picture of an early rooftop test 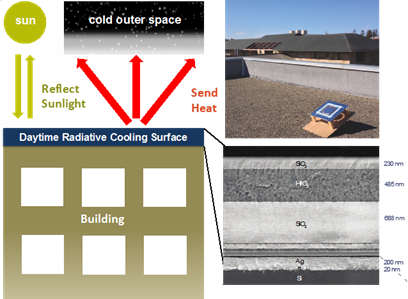 Stanford University engineers have invented a novel coating material that can help cool buildings, even on sunny days, by radiating heat away from the buildings and sending it directly into space. The key to Stanford’s cooling approach is to employ a multilayered coating to reflect nearly all the sunlight across the solar spectrum and also emit energy in the mid infrared frequency range between 8 and 13 micrometers—employing a “window” in the atmosphere that allows a thermal connection to deep space. In this way, waste heat is removed from the local environment.

Stanford University's technology relies on creating structures that tailor the reflection, absorption and emission of light and heat in nanostructured materials. The multilayered coating is just 1.8 microns thick, about 1/100th the thickness of a human hair. The top three layers (two thicker silicon dioxide (SiO2) layers separated by a thick hafnium dioxide (HfO2) layer) act as the radiator, absorbing heat from below and reemitting the energy at wavelengths that can be emitted back into deep space (between 8 and 13 micrometers).

Stanford University has demonstrated its technology in tests during full solar illumination on a California rooftop and shown that it provides heat rejection of ~40 W/m2, lowering temperatures 3 to 5°C below the ambient temperature on the rooftop—a remarkable demonstration of this innovative cooling approach.

The Stanford University team’s innovation could enable buildings, power plants, solar cells and even clothing to cool without using electric power or loss of water, and without the associated emission of waste heat to the local environment. The Stanford team is now scaling this technology to cool water for use with conventional air conditioners and for direct use in the chilled water loops of office buildings, shopping centers and warehouses.

Further studies of Stanford University’s technology to determine specific market applications, either standalone or as part of a complementary cooling system, are ongoing. As an early stage technology, prototype cooling panels have demonstrated a capability that could change existing cooling approaches, and the pathway to economic impact requires developing first markets and demonstrating system reliability and cost-effectiveness. In recognition of this novel cooling technology, the MIT Technology Review recently named the ARPA-E co-Principal Investigator for Stanford University one of its top 35 innovators under the age of 35[1].

Air conditioners in residential and commercial buildings in the United States now consume 336,000 GWh of electricity and create annual CO2 emissions totaling 195 million tons. An initial analysis indicates that the radiative cooling panels that have been developed could save 10-20% of these costs in dry regions, with broader grid-wide benefits of reducing peak electric loads in the middle of the day that are strongly driven by air conditioning.

In addition, there is strong potential for applications in the many situations where cooling affects energy efficiency. For instance, the demonstration of this novel, passive cooling technology by the Stanford University team has led several separately funded groups to propose similar approaches to passive, radiative cooling as part of ARPA-E’s new program on Advanced Research In Dry-Cooling (ARID), which addresses the efficiency of thermoelectric power plants where water use for cooling is restricted. Radiative cooling is a promising approach to create a cold-storage reservoir to chill recirculated cooling water.

As of February 2016, the Stanford University team’s project has generated two invention disclosures with ARPA-E and two U.S. non-provisional patent applications. The team has also published the scientific underpinnings of the technology extensively in the open literature. A list of publications is provided below: