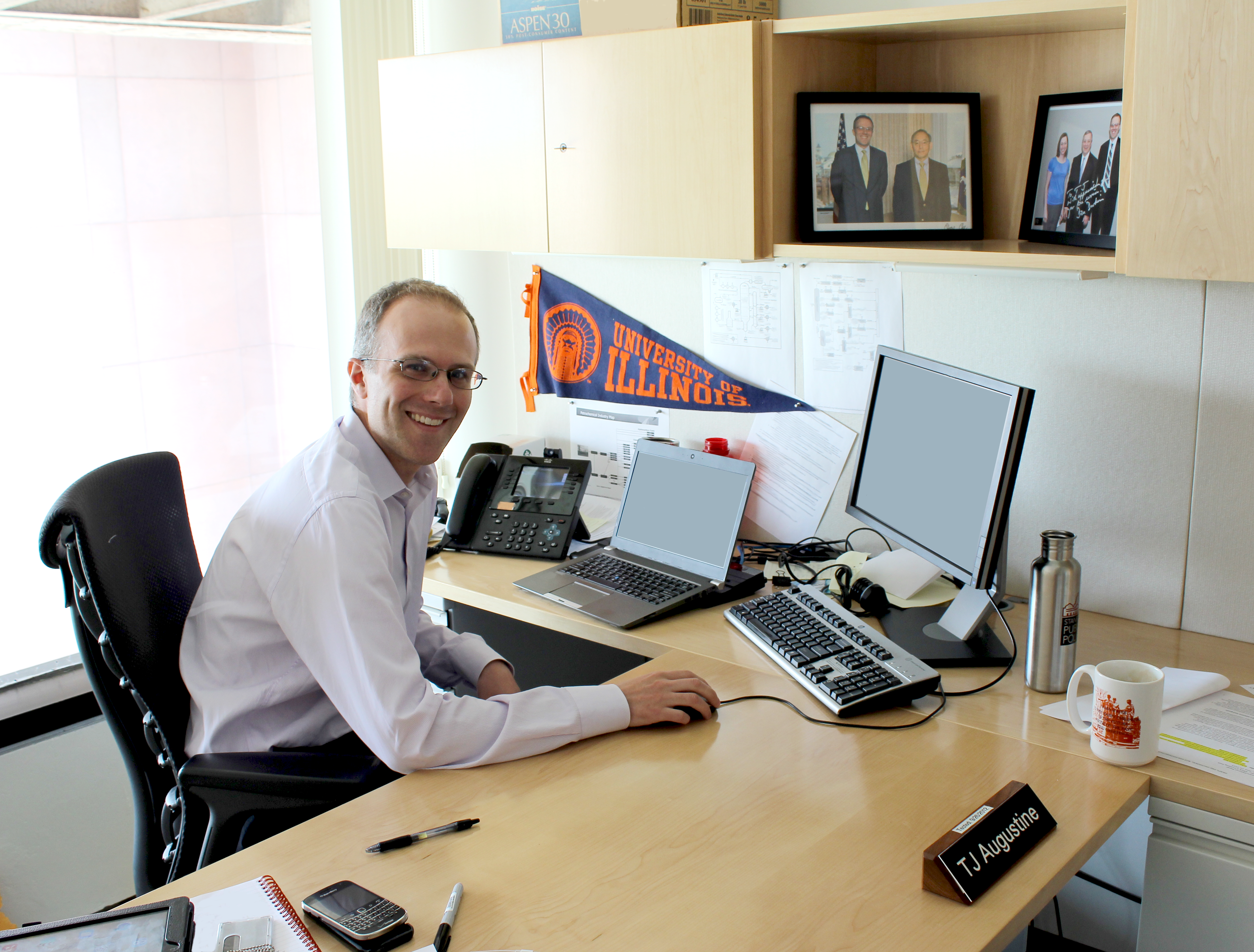 A Look Back with Technology-to-Market Advisor TJ Augustine

Photo: TJ Augustine at his desk at ARPA-E headquarters

For the last three years, TJ Augustine has served as a Technology-to-Market (Tech-to-Market) Advisor at ARPA-E, where he has helped prepare breakthrough energy technologies for transition from the lab to the market. He was responsible for leading the commercialization strategy for Reducing Emissions through Methanotrophic Organisms for Transportation Energy (REMOTE), Plants Engineered to Replace Oil (PETRO), and other ARPA-E programs in the area of liquid transportation fuels.

Here at ARPA-E, Tech-to-Market Advisors serve for limited terms to ensure a constant infusion of fresh thinking and new perspectives. As TJ’s tenure at ARPA-E winds down, we interviewed him to learn more about his experiences over the last three years:

Q: Can you share a little about your background?  How did you come to find yourself at ARPA-E?

A: I first came to the Department of Energy in 2012 to serve as a Special Assistant to Secretary Steven Chu. During my tenure in the Secretary’s office I met Cheryl Martin while she was serving as Acting Director of ARPA-E and became interested in this new Agency. After Secretary Chu left his post, I was interested in exploring a new opportunity and Cheryl was seeking to fill a role on the Agency’s Tech-to-Market team. The position was leading the bioenergy commercialization portfolio at ARPA-E and it seemed like a perfect fit.

Q: When did you first become interested in a career in commercialization? You have more of technical background in chemistry so what caused the change in focus?

A: What made me excited about entering the commercialization side was my love of new technology. While technology is something I'm excited about, it’s not really valuable if it is just science that stays in the lab. In order for technology to have an impact on peoples’ lives and the world, it has to be taken out of the lab and developed into a product that can be sold in the marketplace. Working on the Tech-to-Market team was my way to bridge that divide - working with cool, new technologies that could change the world while making sure they actually have that transformative effect.

Q: What was one of the most rewarding experiences during your time at the Agency? Or to phrase it differently, was there a time where you could really see the difference your work was making?

A: Working with university research teams has been one of the most rewarding elements of my time spent here at ARPA-E. Many of these teams aren’t initially focused on the commercialization aspect of their technology, which motivates me as a Tech-to-Market Advisor to really dig in and provide these teams with valuable insight into the commercialization process from the start of their project. When a university project team ends up spinning out into a startup company, it’s thrilling to watch their transition from the world of academia to a career as a startup and witness their full transition and cycle of commercialization.

On the other end of the spectrum, project teams that were formed from existing companies sometimes find that developing technology organically fits into their existing business model better, and thus the path to commercialization occurs in a more natural way.

Q: What do you think you will miss most about the Agency?

A: I will definitely miss the people the most. I think that's easy to say "I'll miss the people" just about anywhere you work, but ARPA-E is uniquely strong in this area. Without our ability to hire some of the best and brightest people in this field, ARPA-E wouldn't be able to work the way we do, come up with creative programs, or manage projects the way we are able to. Because we put most staff on a three year term, they are motivated to jump in and work hard and fast to get things done in the short time they are here. For that reason, ARPA-E is a really unique environment and there is no question that I will miss the group here when I leave.

Q: As you prepare to leave ARPA-E, how would you describe the Agency’s unofficial mantra, “if it works, will it matter”? How did that one question impact your time here?

A: That mantra impacts everything we do at ARPA-E. We’re trying to figure out if the technologies we fund work and if we are able to find a way to have them impact the world. So, every single thing I do at ARPA-E is trying to answer that fundamental question of "if it works, will it matter?" If we don’t fund technologies that eventually matter, the Agency won't be able to meet any of our mission goals.

Q: What is one piece of advice you would give to aspiring energy technology entrepreneurs?

A: Remember that taking a deep dive into technology can be really cool but sometimes you can lose the bigger picture of what you're trying to accomplish. A love of technology is important, but you always have to be asking yourself these questions:

-What is the problem I'm trying to solve?

-What is the product I'm making?

-Who is going to care about this product?

Once you have asked yourself those key questions, take that feedback and let it guide you in developing your technology. You can create some amazing technology but if no one cares about it and it doesn't solve someone's problem, it’s just going to sit on the shelf and may not have an impact. Bottom line: Remember to focus on the problem you are trying to solve. 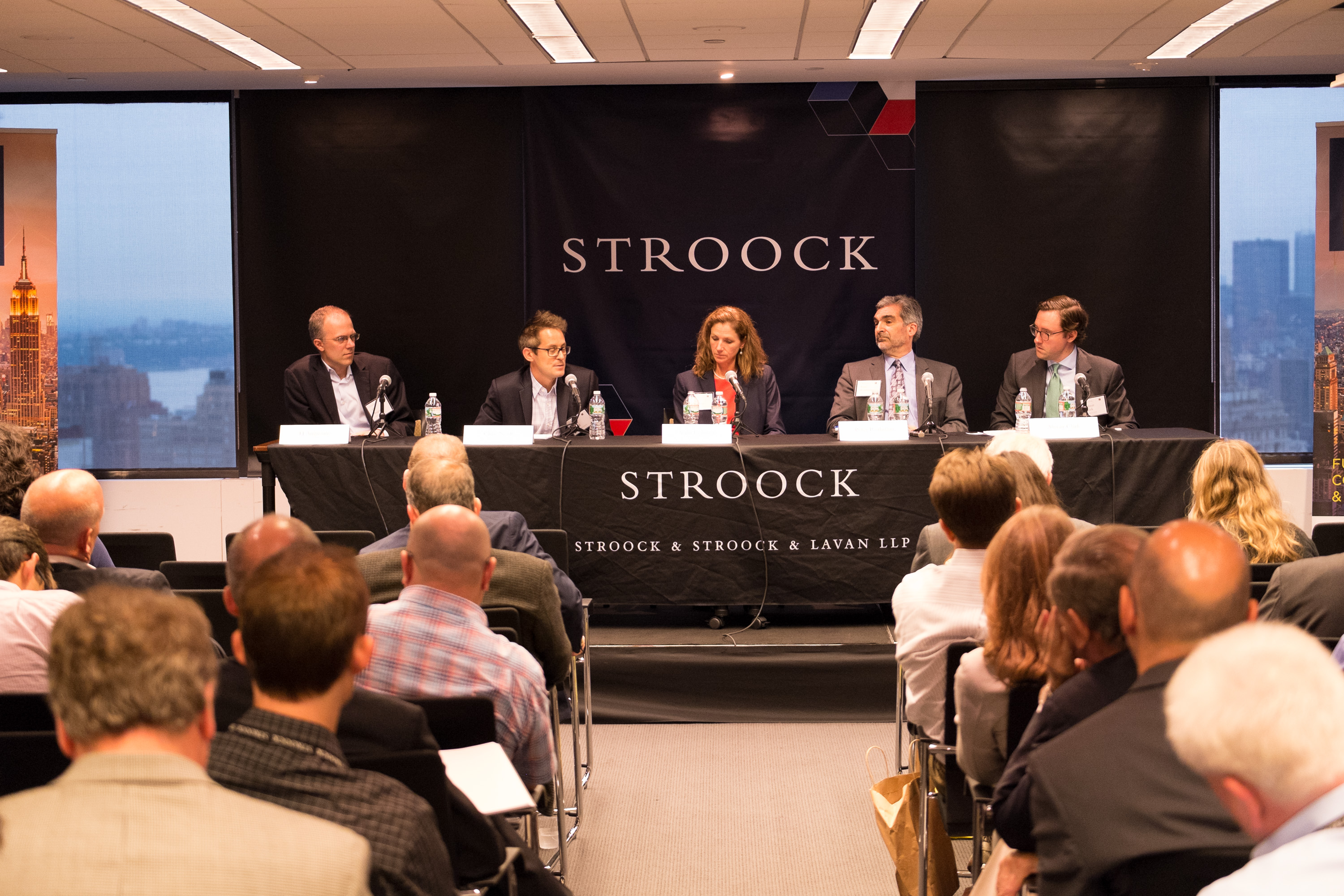 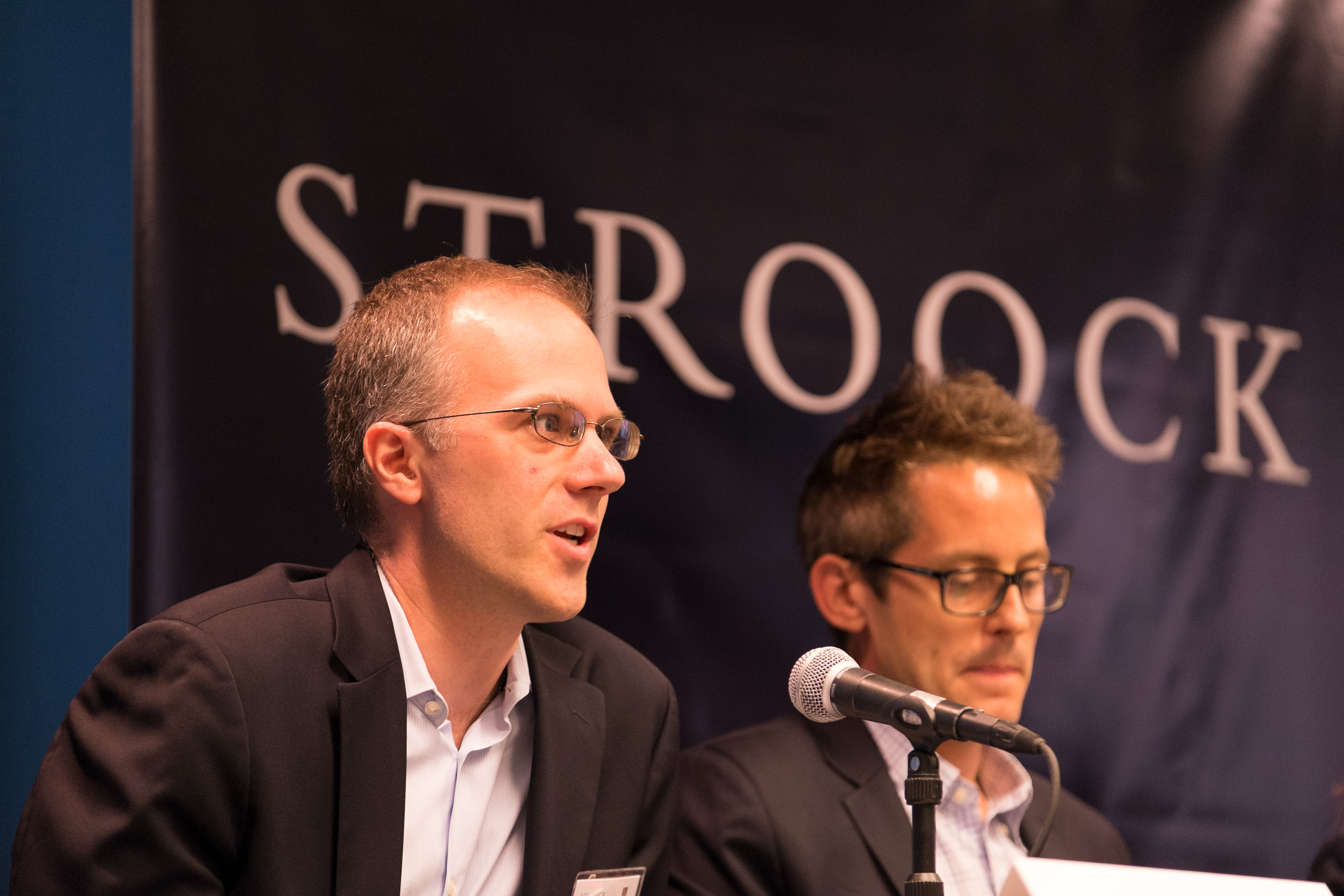 Before joining ARPA-E, Dr. Augustine was Special Assistant to Secretaries Steven Chu and Ernest Moniz at the Department of Energy. In that role he acted as the Secretary’s principal liaison to senior Department staff in the implementation of policy and management directives in areas including energy technology development, environmental management and national security. He was also the lead staffer in the Office of the Secretary coordinating Department-wide activities on various nuclear waste cleanup programs.

Prior to coming to the Department of Energy, Dr. Augustine was an OSA/SPIE/AAAS Science and Technology Fellow in the Office of Illinois Senator Richard J. Durbin. There, he served as an advisor for energy and environmental policy and developed legislative strategies for issues including the Department of Energy’s National Labs, the Clean Air Act, Great Lakes preservation, and federal investment in energy technology and environmental protection programs.

Dr. Augustine began his career with a stint at the White House Office of Science and Technology Policy. While there he worked with the President’s Council of Advisors on Science and Technology in preparation of the Report to the President on Accelerating the Pace of Change in Energy Technologies through an Integrated Federal Energy Policy. He also assisted in the development of the Obama Administration’s Advanced Manufacturing Initiative.

Dr. Augustine earned a Ph.D. in Chemistry and a Master’s degree in Public Policy at Stanford University. He holds a B.S. in Chemistry from the University of Illinois at Urbana-Champaign.