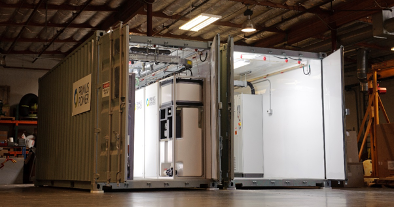 In January, we introduced a new series to highlight the transformational technology our project teams are developing across the energy portfolio. The U.S. electric grid has limited ability to store excess energy, so electricity must constantly be over-generated to assure reliable supply. Advanced energy storage promises to play a key role in modernizing the nation’s electricity grid to enable the integration of increasing amounts of renewables, improve operating capabilities, enhance reliability, allow deferral of infrastructure investments and provide backup power during emergencies. The Primus Power and City University of New York Energy Institute (CUNY-EI) teams developed unique approaches to turning battery storage ideas into reality.

Primus Power developed a zinc-based, rechargeable liquid flow battery that could produce substantially more energy at lower cost than conventional batteries. Primus Power investigated and developed mixed-metal materials for their electrodes that ultimately reduced the lifetime cost of flow batteries, because they are more durable and last longer than electrodes used in traditional batteries. These new electrodes enable Primus Power's flow batteries to be grouped together into robust, containerized storage pods for use by utilities, renewable energy developers, businesses, and campuses.

Primus Power’s electrode design technology developed under its ARPA-E award has demonstrated the competitive performance and lowered storage costs possible with flow batteries. The company’s flow battery system has demonstrated potential to deliver very long lifetimes, and to cost less when manufactured in high volumes than the projections for Li-ion batteries at scale.  The demonstration of such new technologies in challenging commercial applications is an essential step to incentivize greater use of battery storage to modernize the electric power grid.

Primus Power also developed a unique cell design that eliminates the need for a separator to keep the reactants apart when charged, by taking advantage of the way zinc and bromine behave in the cell. The new configuration eliminates the cost and durability challenges associated with the cell separator, and simplifies the electrolyte storage tank.

Primus Power has continued development and commercialization of its product. In 2019, the California Energy Commission awarded Primus $4M to advance manufacturing of long duration batteries. Primus was named to the 2019 Global Cleantech 100, out of 8,000 nominees from more than 80 countries. The final list contains the companies best positioned to solve the future’s cleantech challenges and make an impact on the market. 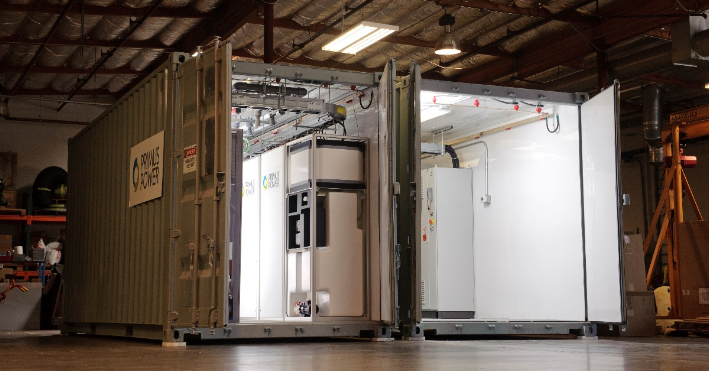 In 2019, CUNY-EI was recognized for a breakthrough using chemical dopants, such as copper ions, to stabilize the MnO2 cathodes in these batteries which enabled them to be recharged thousands of times without degraded capacity. In parallel, progress has been made in structuring and stabilizing Zn anodes with electrode and electrolyte additives that allow full utilization of the battery capacity while mitigating problems that degrade Zn-anode lifetime, such as dendrite formation, shape change and passivation. The resulting batteries feature energy densities approaching 200Wh/L with costs comparable to those of lead acid batteries. The batteries do not have the temperature limitations of lithium-ion and lead-acid batteries. They do have an aqueous chemistry, are non-flammable, and use abundant materials in use in existing supply chains.

Members of the CUNY-EI team founded a battery startup, Urban Electric Power (UEP), which built a pilot scale manufacturing plant that is commercializing the battery technology. When manufactured at high volume production, the batteries can be produced for <$50/kWh, expanding renewable energy generation and significantly reducing CO2. For example, storing 20% of the energy generated by renewables allows the plant to use those renewables for base load generation, typically the minimum power supplied at a continuous rate, further displacing traditional electricity generation. This translates to an additional reduction of 0.4 G Tons of CO2 per year. At this cost level, grid-scale batteries would be well positioned to be economically attractive solutions for a wide range of grid services, setting the stage to enable greatly increased penetration of renewables into the power grid system.

CUNY-EI and Primus Power’s technologies create lower cost battery storage with increased lifetimes. The technology has the opportunity to match the power and energy scale of the electrical grid, while minimizing impact on the cost of electric power delivery. This ability to reliably store and utilize energy will enable the widespread use of renewables, as well as an enhanced, more reliable grid for the future.