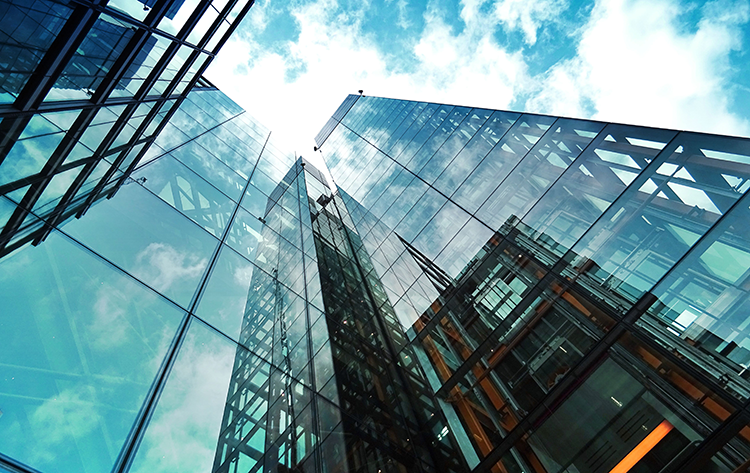 In January, we introduced a new series to highlight the transformational technology our project teams are developing across the energy portfolio. About 13% of all energy produced in the United States today is used to heat, cool, and ventilate buildings. Furthermore, 37% of all energy used by commercial buildings and 40% of residential buildings goes toward HVAC. Through smart window coatings and energy sensors, the University of Texas at Austin and Stanford University teams are turning building efficiency ideas into reality.

Buildings account for 40% of all energy used in the U.S., and the energy lost through typical windows can boost a building's energy bill as much as 25%. Today's electrochromic (EC) windows--which dynamically control transmittance of sunlight to reduce both cooling requirements in the summer and heating requirements in the winter--can be cost prohibitive for homeowners and commercial building managers. In order to support greater implementation of these promising window technologies, improvements in the overall performance of the windows coatings are necessary as well as streamlining of the manufacturing process and a reduction in the overall cost.

The University of Texas at Austin (UT Austin) OPEN 2012 team, together with their recent startup Heliotrope Technologies, set out to develop low-cost coatings that control how light enters buildings through windows. UT Austin’s innovative “dual-band” design individually controlled the transmission of infrared and visible components of sunlight, allowing building occupants to better control the amount of heat and the brightness of light that enters the structure, saving heating, cooling, and lighting costs.  The coating could be applied to windows through a solution deposition process which would be significantly lower cost that incumbent EC windows that are prepared via expensive vacuum deposition processes.  Further, the team’s coating assumes a color-neutral appearance in the low-light transmitting state, which is a contrast to the blue-color appearance of traditional EC coatings which are negatively viewed by building architects and engineers.

The window market is highly sensitive to coloration and requires long-term durability. The team is experimenting with variants of their successful chemistries to achieve improved coloration and durability, and is also carrying out environmental stress testing to identify and mitigate the deleterious effects of long-term aging.

While the dual-band coating demonstrated impressive performance in laboratory tests, the team shifted their focus toward a nearer-to-market traditional single-band EC window that could be fabricated at significantly lower cost than existing commercially-available EC windows due to the solution-processed manufacturing technique. The Heliotrope team estimates an installed actual selling price significantly less than the ~$50/ft2 for competing products, and a near 7-fold reduction in capital costs for manufacturing equipment. The team has established agreements with window fabricators to produce or sell EC panes rather than competing directly with full insulated glazing unit (IGU) window assembly manufacturers.

The team produced eight subject inventions, four patent applications, and were issued one patent during their project. The Heliotrope team plans to establish itself in the EC window market with a single band product while work continues on the dual-band window. The first market for the dual band window may be in higher value “stepping-stone” product offerings such as vehicular windows, skylights, or sunroofs.

The promise of the project team’s technology has been recognized through investment by Prelude Ventures, receipt of an R&D 100 award in 2013, selection for $1M in Small Business Innovation Research (SBIR) funding in 2014, and selection for $250k of funding through the Wells Fargo Innovation Incubator program. In 2018 and 2019, the Heliotrope team announced multiple manufacturing agreements to help bring their product to market. Check out Heliotrope’s website for more information on the company. 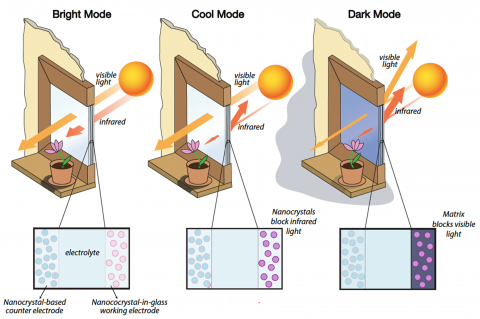 Dual-band electrochromics employing nanocrystals embedded in a polyoxometalate (POM)-derived glass.  NIR transmission is modulated via capacitive charging of the plasmonic nanocrystals whereas visible light transmission is independently controlled via polaronic absorption in the glass matrix

Energy-sensing technologies like smart meters are being rapidly deployed to help inform consumers about their energy-use choices. Giving homeowners greater access to their energy-use data is a positive step, but such efforts require an understanding of human behavior in order to optimize the potential energy and cost savings to homeowners. A team of researchers from more than 10 departments at Stanford University collaborated to transform the way Americans interact with our energy-use data.

The Stanford University team built a web-based platform that collects historical electricity data, which it uses to perform a variety of experiments to learn what triggers people to respond. Experiments included new types of financial incentives, a calculator to understand the potential savings of efficient appliances, new Facebook interface designs, communication network studies using Twitter, and educational programs with the Girl Scouts. Economic modeling was conducted to better understand how results from the San Francisco Bay Area can be broadened to other parts of the country.

Stanford's web-based energy services platform and new behavioral experiments has the potential to help homeowners save energy, improve their energy efficiency, and reduce their monthly utility bills. The Stanford team’s approach to creating controllable window could enable projected U.S. energy savings of up to 0.6 quads using electrochromic windows in certain climate areas. The more efficient technologies will reduce utility bills, as well as lower electricity consumption and the strain on the U.S. electric grid.