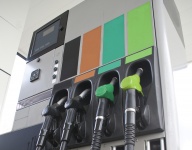 ARPA-E's Electrofuels program is using microorganisms to create liquid transportation fuels in a new and different way that could be up to 10 times more energy efficient than current biofuel production methods. ARPA-E is the only U.S. government agency currently funding research on electrofuels.

Most biofuels are produced from plant material that is created through photosynthesis, a process that converts solar energy into stored chemical energy in plants. However, photosynthesis is an inefficient process, and the energy stored in plant material requires significant processing to produce biofuels. Current biofuel production methods are also intensive and require additional resources, such as water, fertilizer, and large areas of land to grow crops. Electrofuels bypass photosynthesis altogether by utilizing microorganisms that are self-reliant and don't need solar energy to grow or produce biofuels. These microorganisms can directly use energy from electricity and chemical compounds like hydrogen to produce liquid fuels from carbon dioxide (CO2). Because these microorganisms can directly use these energy sources, the overall efficiency of the fuel-creation process is higher than current biofuel production methods that rely on the more passive photosynthesis process. Scientists can also genetically modify the microorganisms to further improve the efficiency of energy conversion to liquid fuels. And, because electrofuels don't use photosynthesis, they don't require the prime agricultural land or water resources of current biofuels.

Widespread use of electrofuels would help limit greenhouse gas emissions and reduce demands for land, water, and fertilizer traditionally required to produce biofuels.

A domestic electrofuels industry could contribute tens of billions of dollars to the nation's economy. Widespread use of electrofuels could also help stabilize gasoline prices—saving drivers money at the pump.