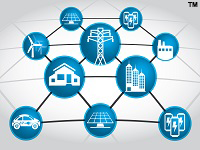 The Network Optimized Distributed Energy Systems (NODES) Program aspires to enable renewables penetration at the 50% level or greater, by developing transformational grid management and control methods to create a virtual energy storage system based on use of flexible load and distributed energy resources (DERs). The challenge is to cost-effectively and reliably manage dynamic changes in the grid by leveraging these additional grid resources, while maintaining customer quality of service. The expected benefits include reduced periods of costly peak demand, reduced energy waste and increased penetration of renewable energy production. The NODES Program will bring together different scientific communities such as power systems, control systems, computer science, and distributed systems to accelerate the development of new technologies enabling active control of load and DERs in coordination with the grid.

The infrastructure that defines the U.S. electric grid is based largely on pre-digital technologies developed in the first part of the 20th century. In subsequent decades, grid development has evolved through emphasis on safety, accessibility, and reliability to security and resiliency. Throughout this evolution, the grid mainly relied on centralized power plants and developed protocols to provide system reliability based on that model. However, currently the increasing use of renewable generation DERs, such as residential solar and home energy storage, along with customers’ changing energy use patterns are leading to greater uncertainty and variability in the electric grid. The next generation grid requires real-time adaptation by advanced management and control methods and architectures to enable a new interconnected power system, with a high level of renewable generation and a large number of DERs, while maintaining the quality of service, resiliency, and reliability that customers expect.

The NODES Program will leverage advances in computing and data communications to enable control of load and distributed generation and, if successful will result in facilitating larger-scale renewables integration on the grid.

Innovations from the NODES Program would help the U.S. grid assimilate at least 50% of renewable generation and maintain system reliability and resiliency while managing emerging energy generation and consumption patterns.

The addition of flexible loads and DERs into the U.S. grid could offset 3.3 quads of thermal generation and displace 290 million tons of CO2 emissions.

Using the NODES approach to integrate flexible loads and DERs into the grid could replace 4.5 GW of spinning reserves (i.e. generation capacity on stand-by in case of outages and unforeseen intermittency) a value of $3.3 billion per year.