Renewable Energy to Fuels Through Utilization of Energy-Dense Liquids 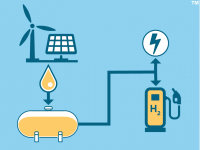 Most liquid fuels used in transportation today are derived from petroleum and burned in internal combustion engines. These energy-dense fuels are currently economical, but they remain partially reliant on imported petroleum and are highly carbon intensive. Alternatives to internal combustion engines, like fuel cells, which convert chemical energy to electricity, have shown promise in vehicle powertrains, but are hindered by inefficiencies in fuel transport and storage. Projects in the Renewable Energy to Fuels Through Utilization of Energy-Dense Liquids (REFUEL) program seek to develop scalable technologies for converting electrical energy from renewable sources into energy-dense carbon-neutral liquid fuels (CNLFs) and back into electricity or hydrogen on demand. REFUEL projects will accelerate the shift to domestically produced transportation fuels, improving American economic and energy security and reducing energy emissions.

Carbon-neutral liquid fuels as defined by REFUEL are hydrogen-rich and made by converting molecules in the air (nitrogen or carbon dioxide) and hydrogen from water into an energy-carrying liquid using renewable power. While existing fuel-cell electric vehicles (FCEVs) use pure hydrogen as a fuel, the limitations of hydrogen storage and transportation have made it difficult and expensive to build transmission, distribution, and refueling infrastructure for mass adoption of these vehicles. The CNLFs of REFUEL address these challenges by using the infrastructure already in use by traditional liquid fuels. Once the CNLF arrives at its point of use, it can be used to generate electricity in a fuel cell or produce hydrogen on demand, greatly reducing transportation and storage costs.

REFUEL projects will aid in the development of energy sources that are readily produced and easily transported, like ammonia. REFUEL program and related projects have developed promising component technologies and small systems for the synthesis and use of ammonia at scale of up to 10 kg/day. Developments include new catalysts, reactor designs, separation strategies, strategies for accommodating intermittent electrical power, and technologies to convert ammonia to hydrogen or electricity. These technologies, however, still face significant technical risk. They are small-scale, and typically focused on one piece of the overall process of ammonia synthesis and use.

ARPA-E will also support an additional project team to integrate technology components and validate technology performance using renewable energy sources under realistic conditions at a field test site. To mitigate the substantial negative energy and environmental consequences associated with the current chemical process to synthesize ammonia, ARPA-E is funding a pre-production, integrated system involving a skid-mounted ammonia synthesis system at a production scale of 1 metric ton of ammonia per day and validating some ammonia use technologies at smaller scale.

If successful, developments from REFUEL will enable energy generated from domestic, renewable resources to increase fuel diversity in the transportation sector in a cost-effective and efficient way.

The U.S. transportation sector is heavily dependent on petroleum for its energy. Increasing the diversity of energy-dense liquid fuels would bolster energy security and help reduce exposure to energy imports.