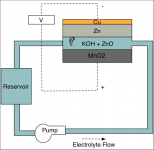 Our national electric grid has limited ability to store excess energy, so electricity must constantly be over-generated to assure reliable supply. Though wind and solar power are promising clean alternatives to fossil fuels, their natural unpredictability and intermittency present major challenges to delivery of the consistent power that is necessary to operate today's grid. The U.S. needs technologies that can store renewable energy for future grid-use at any location. Flexible, large-scale storage would create a stronger and more robust electric grid by enabling renewables to contribute to reliable power generation.

City University of New York (CUNY) Energy Institute is working to tame dendrite formation and to enhance the lifetime of Manganese in order to create a long-lasting, fully rechargeable battery for grid-scale energy storage. Traditional consumer-grade disposable batteries are made of Zinc and Manganese, two inexpensive, abundant, and non-toxic metals, but these disposable batteries can only be used once. If they are recharged, the Zinc in the battery develops filaments called dendrites that grow haphazardly and disrupt battery performance, while the Manganese quickly loses its ability to store energy. CUNY Energy Institute is also working to reduce dendrite formation by pumping fluid through the battery, enabling researchers to fix the dendrites as they form. The team has already tested its Zinc battery through 3,000 recharge cycles (and counting). CUNY Energy Institute aims to demonstrate a better cycle life than lithium-ion batteries, which can be up to 20 times more expensive than Zinc-based batteries.

If successful, CUNY Energy Institute's project would put the U.S. on a path towards creating a smarter grid with low-cost batteries that are capable of storing enough electricity to power homes, cars, and cities.

A more efficient and reliable grid would be more resilient to potential disruptions.