Heating and Compression Mechanisms for Fusion 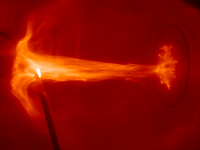 Fusion energy holds the promise of virtually limitless, clean power production. Although fusion has been demonstrated in the laboratory, scientists have been unable to successfully harness it as a power source due to complex scientific and technological challenges and the high cost of research. Most fusion research focuses on magnetic confinement (low plasma density) or inertial confinement (high plasma density), but hybrid approaches with intermediate densities, such as magneto-inertial fusion (MIF), could have lower costs because of their reduced size, power, and energy requirements. In MIF, an imploding shell called a liner compresses a magnetically insulated plasma, causing its nuclei to fuse. The plasma is brought to the high temperatures required for fusion using adiabatic heating, meaning that it is compressed without heat loss in order to increase its temperature. This method of heating has been demonstrated in the laboratory, but further investigation is required to scale it for use in magneto-inertial fusion reactors. New research approaches are also needed because the liner is generally destroyed with every experiment in the MIF approach, making research slow and expensive.

Caltech, in coordination with Los Alamos National Laboratory (LANL), will investigate the scaling of adiabatic heating of plasma by propelling magnetized plasma jets into stationary heavy gases and/or metal walls. This is the reverse of the process that would occur in an actual fusion reactor – where a gas or metal liner would compress the plasma – but will provide experimental data to assess the magneto-inertial fusion approach. By using this alternative frame of reference, the researchers will be able to conduct experiments more frequently and at a lower cost because the experimental setup is non-destructive. The team will investigate the jet-target collision using many experiments with a wide range of parameters to determine the actual equation of state relating compression, change in magnetic field, and temperature increase. The experimental work will be supplemented with advanced 3D computer models. If successful, these results will show that compressional heating by a liner is a viable method for increasing temperatures to the levels required for magneto-inertial fusion. The study will also provide critical information on the interactions and limitations for a variety of possible driver and plasma target combinations being developed across the ALPHA program portfolio.

Caltech’s innovations could accelerate the development of cost-effective fusion reactors, which could provide a nearly limitless supply of domestic power and eliminate dependence on foreign sources of energy and limited fuel supplies.