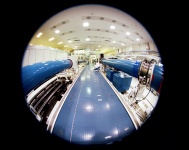 Fusion energy holds the promise of virtually limitless, clean power production. Although fusion has been demonstrated in the laboratory, scientists have been unable to successfully harness it as a power source due to complex scientific and technological challenges and the high cost of research. Most fusion research focuses on magnetic confinement (low plasma density) or inertial confinement (high plasma density), but hybrid approaches with intermediate densities, such as magneto-inertial fusion (MIF), could cost less because of their reduced size, energy, and power density requirements. In MIF, an imploding shell called a liner compresses a magnetically insulated plasma fuel, causing its nuclei to fuse. However, bringing the plasma fuel to the extremely high temperatures and densities required to achieve fusion is a very difficult technical challenge. An additional challenge in designing fusion reactors is that the behavior of the hot plasma fuel as it approaches fusion conditions is not fully understood, making it difficult to systematically improve reactor designs.

Sandia National Laboratories will partner with the Laboratory for Laser Energetics at the University of Rochester to investigate the behavior of the magnetized plasma under fusion conditions, using a fusion concept known as Magnetized Liner Inertial Fusion (MagLIF). MagLIF uses lasers to pre-heat a magnetically insulated plasma in a metal liner and then compresses the liner to achieve fusion. The research team will conduct experiments at Sandia’s large Z facility as well as Rochester’s OMEGA facilities, and will collect key measurements of magnetized plasma fuel including temperature, density, and magnetic field over time. The results will help researchers improve compression and heating performance. By using the smaller OMEGA facility, researchers will be able to conduct experiments more rapidly, speeding the learning process and validating the MagLIF approach. Sandia’s team will also use their experimental results to validate and expand a suite of simulation and numerical design tools to improve future fusion energy applications that employ magnetized inertial fusion concepts. This project will help accelerate the development of the MagLIF concept, and assist with the continued development of intermediate density approaches across the ALPHA program.

If successful, Sandia’s work will validate the MagLIF technique and provide important experimental and computational results that will help enable a rapid development path towards economical fusion power.

Sandia’s work could accelerate the development of cost-effective fusion reactors, which could provide a nearly limitless supply of domestic power and eliminate dependence on foreign sources of energy.