MEMS Based Drivers For Fusion 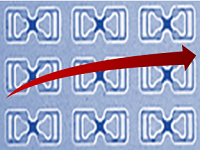 Fusion energy holds the promise of virtually limitless, clean power production. Although fusion has been demonstrated in the laboratory, scientists have been unable to successfully harness it as a power source due to complex scientific and technological challenges and the high cost of research. Most fusion research focuses on magnetic confinement (low plasma density) or inertial confinement (high plasma density), but it is thought that hybrid approaches with intermediate densities, such as magneto-inertial fusion, could have lower costs because of their reduced size, energy, and power density requirements. In this approach, an imploding shell called a liner compresses a magnetically insulated plasma, causing its nuclei to fuse. A device called a driver is used to deliver an immense amount of energy to the plasma fuel in order to bring it to the high temperatures and pressures required for fusion. One of the challenges of using this approach is to design cost-effective drivers that can efficiently deliver the energy needed to the plasma.

LBNL, in coordination with Cornell University, will develop a driver for magneto-inertial fusion based on ion beam technology that can be manufactured with low-cost, scalable methods. Ion beams are commonly used in research laboratories and manufacturing, but currently available technology cannot deliver the required beam intensities at low enough cost to drive an economical fusion reactor. LBNL will take advantage of microelectromechanical (MEMS) technology to develop a design consisting of thousands of mini ion “beamlets” densely packed on silicon wafers – up to thousands of beamlets per 4 to 12 inch wafer. Ions will be accelerated using radio-frequency driven accelerators, resulting in extremely high current densities and high-intensity ion beams that can be focused on plasma targets to achieve fusion. The use of MEMS technology enables low-cost batch fabrication, which could reduce the overall cost of a fusion reactor, in addition to enabling drivers that are modular and scalable. If successful, this project will result in an economical and flexible ion beam driver technology for magneto-inertial fusion reactors.

If successful, LBNL and Cornell’s research will provide a design for low-cost driver technology that could be used to help achieve economical fusion power production.

LBNL’s innovations could accelerate the development of cost-effective fusion reactors, which could provide a nearly limitless supply of domestic power and eliminate dependence on foreign sources of energy and limited fuel supplies.