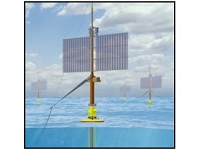 Offshore wind offers a large renewable energy resource that could significantly decrease CO­2 emissions and reliance on fossil fuels, but the current cost of electricity from offshore wind is not competitive with other methods for generating electricity. The trend in the industry has been towards larger turbines for increased power output from each tower, thereby reducing the relative impact of installation, maintenance, and other system costs. This has led to substantial cost reductions, but offshore wind has not yet reached a competitive price point. New approaches and innovative designs that significantly reduce the cost of hardware, installation, and operation of offshore wind systems will help meet the country’s long-term energy goals.

The team led by Accio Energy will develop an ElectroHydroDynamic (EHD) system that harvests energy from the wind through physical separation of charge rather than through rotation of an electric machine. The EHD technology entrains a mist of positively charged water droplets into the wind, which pulls the charge away from the electrically-grounded tower, thereby directly converting wind energy into a mounting voltage. The resulting High-Voltage Direct Current (HVDC) can then be transferred across higher efficiency power lines without the need for a generator, a gearbox, or costly high power AC-DC conversion required by traditional wind energy systems. The simple design of the EHD wind system is highly modular, and can be built with low-cost, mass manufacturing approaches. EHD systems also have minimal moving parts, and can be “containerized” for easy transport and installation at offshore sites. In contrast to the current trend for larger (and relatively expensive) turbines with increased power-per-tower, the EHD approach would utilize low-cost hardware with simple transport and installation, and native HVDC operation to reduce the cost of electricity from offshore wind. EHD technology can also operate at lower wind velocities than traditional turbines, and can thus increase the capacity factor at locations with highly variable winds. If successful, this project will demonstrate EHD technology as an entirely new option for offshore wind that offers a different path to cost effective utilization of a large renewable resource.

If successful, Accio Energy will develop a ElectroHydroDynamic (EHD) turbine-less wind energy system to offer a new and potentially disruptive innovation for the wind energy market and enable greater deployment of wind energy in the U.S. electrical grid, ultimately reducing reliance on fossil-fuel based electricity generation.

The lower wind speed required for this system’s operation will lead to much higher capcity factors than traditional wind turbines, lessening fossil-fuel based electricity generation, which will reduce CO2 and other greenhouse gas emissions.

This technology could reduce the cost of wind energy production and provide an entirely new option for the offshore wind industry.