Natural gas vehicles (NGV) provide a significant opportunity to reduce emissions and increase U.S. energy security, enabled by the substantial increases in U.S. natural gas reserves and annual production over the past ten years. However, there are fewer than 900 public compressed natural gas refueling stations in the United States today (vs. over 150,000 gasoline stations), which represents a significant obstacle to the increased adoption of NGVs. Furthermore, the current cost of a natural gas refueling station is about $1.6 million, compared to about $100,000 for gasoline. At these costs, a natural gas infrastructure that supports light, medium, and heavy-duty fleet vehicles presents an economic barrier. Significant improvements must be made to the infrastructure and accessibility of compressed natural gas to accelerate NGV adoption.

There are over 70 million homes and commercial sites with access to natural gas delivered at low or medium pressure. Low cost, easily deployed gas compression systems that can work from this distribution network would provide a natural infrastructure for supporting natural gas vehicles. However, conventional compression systems capable of tapping into a low-pressure site now cost over $5,000 and take over 12 hours to fill a vehicle with a 10-gallon tank. In addition, these systems require access to electric power. Using internal combustion engines with integrated natural gas compression capability provides an opportunity for many applications to minimize compression systems’ costs and complexity. 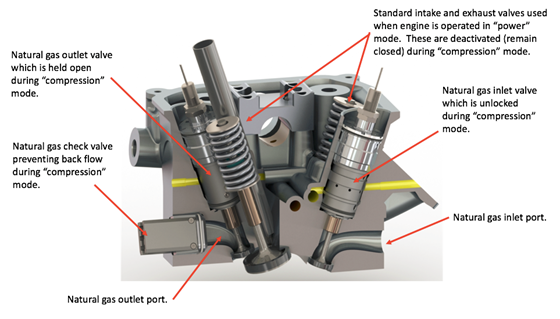 Onboard Dynamics (ObDI) received an ARPA-E award for development of a mechanism in which a natural-gas-driven internal combustion engine (ICE) can be used to compress low pressure natural gas to 250 bar (3,600 psi) for storage. The engine compressor takes advantage of the existing compression capability of an internal combustion engine. Two of the three compression stages occur in the engine, which can be the engine in a natural-gas-powered vehicle itself.

The project team developed a custom cylinder head (Figure 1) in which the engine cylinders can be used for both multistage compression and normal combustion. The custom engine head contains the manifolding for the staged compression, and it enables valve deactivation, which is necessary for the cylinders to function both as compressors and combustion chambers. Ultimately, the engine would then have the ability both to power a vehicle and to compress natural gas.

Natural gas compression takes place in one cylinder bank of the engine, with the other cylinder bank providing power (Figure 2). When the tank is filled, the vehicle can revert back to transportation mode and the stored compressed natural gas (CNG) will be consumed by the ICE to drive the vehicle. The Onboard Dynamics engine compressor thus allows a vehicle to refuel itself, and other vehicles, at any natural gas source.

Subject to further development, if this onboard compression capability is incorporated as part of the vehicle manufactured directly to run on natural gas, the incremental costs could be less than $1000/vehicle. 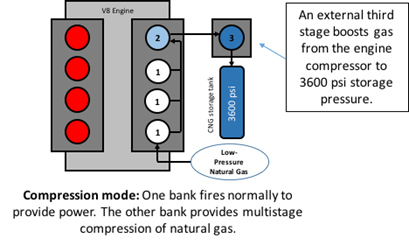 ObDI was launched as a startup company to further develop and commercialize the CNG technology that originated at Oregon State University (OSU). As part of its ARPA-E project, ObDI designed, fabricated, and installed a prototype custom cylinder head onto a Ford 6.2 liter V8 engine and demonstrated its ability to successfully compress air on a dynamometer test stand.

ObDI expects the first markets for the compressor technology to draw on the technology’s characteristics of being self-powered (i.e. using natural gas directly and not requiring an electrical connection) and being economical at small scale. Based on market research conducted by ARPA-E, there is a market for mobile electrical compressors such as the ObDI system. The project team hopes to provide an economically competitive product and ObDI is evaluating this as a first market and a path to driving down production costs, while continuing parallel development of the in-vehicle option.

Reduced natural gas compression costs are a key to increased use of natural gas as a low-emission alternative or transitional transportation fuel. This is particularly important as a complement to electrification and the use of biofuels. ObDI’s innovation could help remove the barrier of developing a natural gas refueling infrastructure. Converting a significant fraction of U.S. vehicles to natural gas could lead to the same fractional decrease in present U.S. levels of imported oil.

As of February 2016, the ObDI project has resulted in five subject invention disclosures to ARPA-E and two U.S. PTO patent applications.