Natural gas vehicles (NGV) provide a significant opportunity to increase U.S. energy security, enabled by the substantial increases in U.S. natural gas reserves and annual production over the past ten years. However, the large, cumbersome, and expensive on-board fuel tanks presently used in NGVs create a major barrier to increased utilization of natural gas as a transportation fuel. Additionally, the low volumetric density of compressed natural gas – 26.9% of the volumetric energy density of gasoline – limits the driving range of NGVs and makes cost-effective storage solutions an even more important challenge. Significant improvements must be made to the capacity, conformability, and cost of on-board storage to accelerate NGV adoption.

Currently NGVs are outfitted with bulky and expensive cylindrical pressure vessels that can be difficult to fit within the car without compromising passenger utility. The technical potential of a conformable gas tank based on innovative geometries, lighter materials and a new overall design is the opportunity needed to overcome key market barriers that NGVs currently face. Such a tank could potentially be conformed to a variety of shapes with higher storage capacity than current cylindrical tanks.

Figure 1: The Schwarz P-surface structure of the REL conformable tank,
shown schematically and in cross section on a demonstration tank. 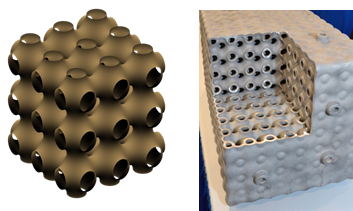 Traditional natural gas storage tanks are cylindrical with hemi-sphere caps, which take up significant amounts of space within a vehicle. REL developed new casting methods to create an internally structured gas tank that enables the manufacture of a tank of arbitrary shape. The team’s natural gas tank design contains an internal structure to add strength and durability to the walls. It resembles the skeletal structure of a sea urchin. The shape is a Schwarz P-surface, which allows for internal stresses to be distributed throughout the internal tank structure. REL used its proprietary casting technologies to develop a high integrity casting to fabricate the complex inner geometry.

The casting innovations include a sacrificial core structure, thermal isolation die coating, and distinct yet complementary field-assisted casting techniques. The tank technology utilizes an efficient internal tank structure, has separate internal volumes, and has a substantial conformability advantage over current cylindrical high-pressure tanks. REL has developed small-scale prototypes and intends to scale up to a full-sized prototype tank operating within a vehicle.

Any storage tank technology will need to be certified to confirm safe performance in automotive conditions before it can enter the market. To address this regulatory barrier to market entry for novel tank technologies, appropriate standards for conformable tanks will need to be developed and validated. To that end, REL has become a member of the Canadian Standards Association (CSA) Natural Gas Vehicle (NGV) 2/HGV 2 Technical Advisory Group (TAG) for compressed natural gas and compressed hydrogen vehicle fuel containers. They have joined this group to address technical issues and draft proposed standards text for industry review and comment, and finally for approval as an American National Standard. The goal is to develop and approve a new edition of NGV2 that paves a path for certification of conformable fuel storage tank technologies.

REL’s initial target application is natural gas pickup trucks, which typically carry the cylindrical natural gas tank in the truck bed. Replacing the cylinder in the bed of the truck will allow owners to use a larger percentage of their cargo space. REL believes it can design a 20 GGE (gasoline gallon equivalent) tank to fit on a Chevy Silverado chassis without compromising any cargo space.

In December, 2014, REL and Michigan Technological University jointly announced $2.1 million in funding (structured as a three-year investment) from Southwestern Energy (SWN).[1] The project is targeting mid-2016 for full-scale tanks integrated into a Chevy 1500 demonstration truck. REL will design and build, test and mount, and finally equip vehicles of SWN’s fleet with the developed tank technology. Prototype quarter-scale tanks have already been burst pressure tested and have achieved the critical 8100 psi milestone. The successful quarter-scale tank will hold approximately 12 GGE for further integration and testing purposes. In-house NGV2 testing continues and third party testing and validation will commence in the first quarter of 2016.

About 27% of oil consumed in the United States is imported, and about 71% of U.S. oil consumption goes to transportation. The U.S. Energy Information Administration (EIA) projects that natural gas use in vehicles will reach almost 1 trillion cubic feet by 2040, compared with the 40 billion cubic feet consumed by natural gas vehicles in 2011. This increase would displace about 700,000 barrels per day of other motor fuels. Consumer willingness to adopt NGVs, particularly for light-duty applications, will be increased by technology innovations such as REL’s conformable gas tank, which frees up vehicle cargo space and allows vehicles to carry more natural gas, improving range between refueling. This improved performance thus enables further reduction of U.S. dependence on imported oil for transportation needs as well as overall greenhouse gas emissions.

As of February 2016, the REL team’s project has generated five invention disclosures to ARPA-E, five U.S. non-provisional patent applications, and one patent issued by the U.S. PTO: