The electric transmission grid faces severe challenges over the next several decades due to the changing nature of electric demand, rapidly increasing renewable generation penetration, retirement of conventional generation and an aging infrastructure. These challenges have led to increased congestion on the electricity grid and higher costs to meet reliability standards, which are required to avoid blackouts that can cause billions of dollars in economic losses annually. A grid operator’s limited ability to control the flow of power through the transmission grid is a major factor limiting performance, as it requires the grid operator to be extremely cautious and set line loading limits significantly below the actual line capacity. This inefficient utilization of capital-intensive grid infrastructure results in increased energy losses, unnecessary and expensive over-build of the transmission system, and impedes the integration of distributed and renewable electricity generation.

Power flow control hardware has traditionally been approached as in-line components that are fully rated for both the large currents and the high voltages of transmission lines. The high costs of developing and manufacturing such units, and the footprint and cost of installing and maintaining them have been significant barriers to cost effective approaches to power flow control. The Smart Wires team based their technology on an alternative concept, originally invented at Georgia Institute of Technology, in which the hardware inductively modifies the current flow using clamp-on magnetic core-based devices distributed along the transmission line. 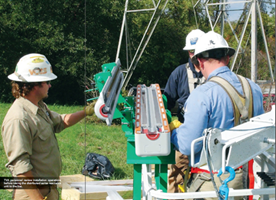 Smart Wires, formerly known as Smart Wire Grid, developed a solution for controlling power flow within the electric grid based on a distributed series reactance (DSR) device, now called the PowerLine GuardianTM. The PowerLine Guardian devices clamp onto existing transmission line conductors and allow the operator to increase the line impedance on command using wireless communication control. The self-powered controller acts like a valve on the power line; it is capable of redirecting power to underutilized power lines in a meshed network for greater efficiency and overload prevention.

Under ARPA-E funding, Smart Wires was able to move from prototype to a field-ready unit in under a year. They developed a control system, electrical and mechanical design, the magnetic core, and packaging for extreme environments. Following laboratory testing under worst-case environmental and operational conditions, they successfully demonstrated units in a Tennessee Valley Authority (TVA) field trial – 100 units deployed on a 161 kV transmission line (Knoxville, TN). The low-cost installation of the devices, and the fact that they do not require integration into substations, enabled the rapid field tests.

The project team developed multiple power system models to identify opportunities to deploy Smart Wires technology and compare those opportunities to conventional network investments.  Preliminary system simulations conducted during the project indicate that these devices could potentially increase overall system utilization by more than 30%. This would allow utilities to significantly increase the capabilities of their existing infrastructure while safely deferring new transmission investment, resulting, in some cases, in a present value savings of over 80% relative to conventional transmission reinforcements. Beyond overload prevention and congestion management, other applications such as phase balancing, also appear promising.

Since the end of the ARPA-E project, the team has also expanded the capabilities of their system-level control software, called PowerLine CommanderTMand developed new types of power flow controllers which are able to both push power away from an over utilized line or incent flow through an underutilized line.

Towards the end of the project, Smart Wires appointed a new CEO and leadership team to advance the commercialization process. The company has raised roughly $60M in three rounds of private-sector funding.

Because utilities must be extremely risk averse, the sales cycle for new technology is long, resulting in significant financial difficulties for small companies bringing new products to this market. Smart Wires has addressed these challenges through a carefully crafted go-to-market strategy and the development of additional product lines. The ARPA-E grant was critical in providing Smart Wires the funding it needed to begin commercialization of its first product.

Smart Wires’ power flow control devices are an early success story in demonstrating the potential to increase overall grid transmission capacity use by improving the utilization of existing lines. Field testing and validation of the Smart Wires devices is on-going, and will provide industry context not only for the Smart Wires approach, but also will allow field tests of power flow control as an operational approach. This, along with parallel developments of planning and control software, will provide the foundation for power flow control to become a key player in the modernization of the electric power grid.

The final impact on the transmission system will depend on widespread acceptance and adoption of power flow control as a viable planning and operational approach. The expected benefits include reduced need for expensive new transmission infrastructure, improved grid reliability and resiliency, reduced congestion and ability to integrate higher penetrations of renewable power sources. The value of these benefits will be further quantified through continued studies, testing and evaluation.

As of February 2016, Tthe Smart Wires team has generated two invention disclosures to ARPA-E. The team has also published the scientific underpinnings of the technology extensively in the open literature. A list of publications is provided below: