Photovoltaic (PV) solar systems convert the sun's energy into electricity, but only a small percentage of the sunlight reaching a PV system is converted into useful electricity. This is partly because the type of electricity (low voltage, direct current) that comes from a PV system must be converted to higher voltage and alternating current before it is transmitted to customers, and this process is inefficient in most PV systems today. The inefficiency arises because the individual panels in a PV system are linked together (in series), and their combined electrical output has historically been processed by one central converter. In this case, because there are variations in performance among the panels (either due to manufacturing, or as a result of shading, wear or damage), the weakest panel limits the energy production of the entire system. More effective conversion could increase yield of useful electricity from PV systems by several percent, however the cost of the improved electronics must be low (<$0.10/Watt) to keep renewable solar energy cost-competitive.

The “central converter” topology has been the workhorse of the PV industry, as it provides a straightforward implementation for large-scale systems. However, a standard central inverter cannot provide the individual adaptations needed (power point tracking (PPT)) to operate each panel at the voltage and current where it is most efficient. This is because the central converter cannot distinguish, measure, or address the panels separately. Applying the concept of differential power processing (DPP), however, has the potential to address this problem. Electronic DPP circuitry optimizes the output energy from each panel separately – and then combines the outputs for delivery to a central DC-to-AC converter, as shown in Figure 1 on the right. A key aspect of DDP is that it uses smart signal processing and computational circuits to sense and process only the mismatched power – which is typically a small percentage of the total power produced by the PV panel array.

Figure 1. Basic Differential Power Processing Concept.  At the module or sub-module level, the differential power processors – or differential converters –  inject small amounts of electrical current at the nodes between each panel (or, in some cases, sub panels), shown as PV1 through PVn in the figure. The injected currents are set to correct for sensed imbalances in the currents generated across the PV elements due to shading or performance mismatches – thus enabling the entire array to operate nearer to its optimum energy conversion state. 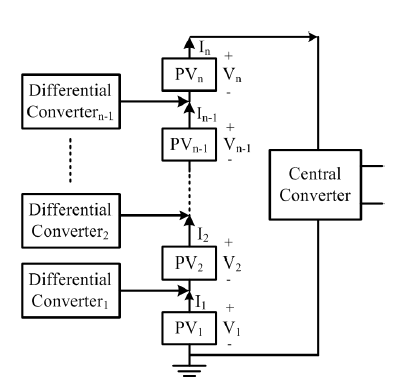 Although the technical aspects of DPP have been well-understood, the key challenge under ARPA-E support was to develop integrated DPP technology that will increase harvesting efficiency while contributing to a total power inverter cost less than $0.05/W. With this goal, SolarBridge, with its partner the University of Illinois at Urbana-Champagne (UIUC), developed two distinct DPP architectures – one as a stand-alone unit and another as a micro-inverter-integrated unit. Both architectures demonstrated enhanced energy harvesting capabilities. For the standalone DPP unit, UIUC applied novel circuit miniaturization and low-power integrated circuit design techniques. The other DPP unit was developed jointly by SolarBridge and UIUC to be directly integrated within SolarBridge’s off-the-shelf micro-inverter platform. Both units demonstrated greater than 95% converter efficiency (per the CEC standard) and greater than 99.4% power point tracking effectiveness[1] (the ratio of input power to theoretical maximum input power).  By comparison, although a central converter can achieve as high as 98% efficiency, the uncorrected mismatch (even without shading) in panels leads to a harvesting reduction of 5-8% over the life of the system. This means that the best the central converter can be expected to do is 98% x 95% ≈ 93% efficiency – giving the micro-inverter a ~2% advantage.

In laboratory tests, the DPP integrated micro-inverter showed a 4% increase in energy harvesting with 1 sub-string of the PV module shaded, and 20% increase with 2 shaded – thereby validating predicted performance enhancement. Analysis of out-door field tests show that, on average (for a typical geographic distribution), SolarBridge’s DPP-based solar power conversion system can be expected to yield approximately 1.5% more annual energy harvest than the conventional methods

While developing the standalone DPP circuitry, UIUC identified and addressed a new critical challenge in performing maximum power point tracking (MPPT). MPPT is the control algorithm that tracks the voltage of a PV cell in order to maximize the power output. The team developed a novel “distributed” MPPT algorithm for standalone DPP architectures and proved its robustness in a multi-sub-module load simulation experiment. Their new algorithm enables module “hot spot” (i.e., damaged or inoperative cells in the module that cause localized over-heating in the panel) detection via robust communication algorithms within distributed PV architectures.

In another illustration of the improvements possible with standalone DPP circuitry, UIUC performed an analysis to determine whether intentionally designing a PV array to have some degree of self-shading might be feasible. The core idea is that crowding more PV modules within a given footprint (such as on a rooftop) may provide a net increase in energy harvest even though more self-shading was present. With DPP mitigating the effects of shading, an optimum array pattern may be devised. In their analysis, UIUC showed that with 98% level of energy harvesting (i.e. 2% reduction due to self-shading) PV panels for a given output could be spaced closer allowing approximately 6.2% more modules to be placed in the same space.

At the conclusion of  the ARPA-E-sponsored program in 2015, SolarBridge (which was aquired by SunPower in 2015) indicated that the company will conduct economic analyses to determine whether the new micro-inverter integrated DPP circuitry developed under the SOLAR ADEPT program will provide a net postive impact on their highest-performance PV module products. Their preliminary assessment was that a slightly higher up-front premium would provide net benefits from improved yield over the lifetime of the system, but that customer acceptance would need to be determined.

The more versatile, but more expensive, standalone DPP circuitry has demonstrated significant potential performance benefits when combined with new MPPT algorithms. The detection of hot spots has the potential to increase the lifetime of PV systems from 22 years to 25 years, and the ability to adapt to space-limited sites, in which shading is a serious problem, may enable wider applications.

If the marginal costs of adding DPP to future PV systems can be further reduced, then the enhanced total conversion efficiency afforded by DPP may have a significant impact on future installations of PV systems. In particular, applications with variable cloud cover or constrained-space (e.g., urban commercial rooftops), where paying up-front premiums may be feasible to maximize net harvested energy over the lifetime of the system, may be the earliest adopters of DPP technology. Critical to this will be developing an effective trade-off in upfront costs verses long-term harvesting payoff. Similarly, the enhanced MPPT algorithms and circuits, developed by UIUC may provide a path toward enhancing the lifetime of PV systems. The end-of-life pay-off versus up-front costs will require further techno-economic analyses to determine the potential impact. Finally, as panel costs continue to shrink relative to the balance-of-system costs, designing systems with some degree of intentional self-shading (to maximize overall long-term yield per cost) may become feasible due to the inclusion of DPP in power conversion elements.

As of September 2015, the SolarBridge team’s project has generated four invention disclosures to ARPA-E and two non-provisional patent applications. The team has also published the scientific underpinnings of this technology in the open literature.  A list of publications is provided below:

[1] Although “lab grade” tests, under ideal shade-free conditions, have yielded 99.8% power point tracking efficiency, the 99.4% achieved here with the DPP micro-inverter approach is a reasonable estimate of the highest tracking effectiveness level attainable in a practical system.