The challenges of improving grid reliability, bolstering infrastructure resiliency, and enabling increasing utilization of renewable energy sources while minimizing costs require more efficient utilization of existing power transmission networks. The ability to optimize the routing of power through existing lines would be a significant step forward. However, traditional technology solutions for power flow control have been too slow, too expensive, and insufficiently flexible. Dynamic power flow control, which would allow real-time redirection of current among the power lines, offers opportunities for dramatically enhancing grid utilization. However, implementation is extremely challenging, as such controllers must operate at high voltages and currents, under extreme environmental conditions, and provide reliability under emergency conditions, such as power surges, that severely stress electronic components. The development of high performing, low-cost dynamic power flow controllers would enable new energy markets, improved integration of renewable resources, and reduce the need for expensive and often controversial new transmission lines.

Recent advances in the power electronics field created new concepts for power flow control. Specifically, one such innovation is the design of power flow control systems using “fractionally rated converters” which are designed to inject a series voltage into transmission lines using power electronics that are rated for only a small fraction of the full system current and voltage.  A relatively small series voltage (e.g. ~10% of nominal voltage) of controlled phase, injected in this way can change the flow in the line over a wide range (e.g. ~100%) and can even reverse the direction of power flow if required. Fractionally rated converter-based system design approaches could enable reductions in the size and rating of electronic components required and reduce overall cost of the system while maintaining higher reliability. A smaller rating also leads to lower losses, and subsequently to a smaller thermal management system, as less heat needs to be dissipated to ambient. If successful, such a power flow control device could, for example, be used to limit the power flow in an otherwise overloaded line. The electricity would be forced to find an alternative path through under-utilized lines, resulting in more efficient use of the entire network.

Figure 1: Schematic of the system design. Fractionally-rated converters are connected to low voltage taps on the secondary windings of the power transformer (as shown in the center of the figure). The configuration enables controlled injection of a series voltage on each phase (using voltages from the other two phases as inputs).  External control signals are applied at the bases of the four transistors in each converter. The converter outputs (Vconv) are added to the original phase voltages creating phase shifts on each of the three outputs, which result in power flow changes. The delta primary winding for the transformer is also illustrated. 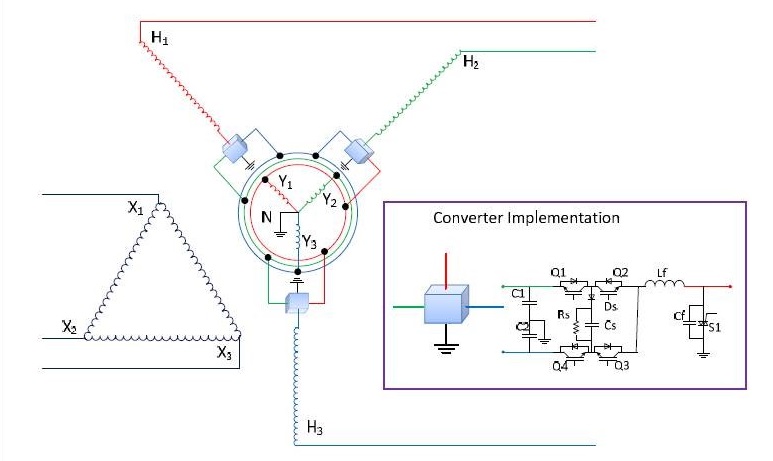 The schematic of the device is shown in Figure 1. Its three fractionally-rated direct AC converters are attached to low voltage taps on the secondary of a transformer. The power electronics converters are comprised of an AC chopper circuit that can be rated at only a fraction of the total line power, typically selected to be 10-20% of the total system rating.

The Varentec project team considered several possible configurations for the power flow control device. Tradeoffs involving system cost, ease of installation and maintenance, size, efficiency, and scalability to high voltages were all considered carefully.  In the final design, the power electronics are connected near the neutral of a power transformer (as shown in Figure 1). This greatly reduces the insulation requirements and lowers the overall cost of the equipment. This design also enables installation of the device as a retrofit (connected to the neutral point of an existing transformer) or as a new-build device in which the fully rated transformer is included.

The Varentec team built three fully functional power flow controllers that were tested and operated in a specially-built 12.47 kV 1MVA meshed power network testbed at Georgia Tech’s National Electric Energy Testing Research and Applications Center (NEETRAC) utility test facility. Technical components of the design included a custom transformer, three AC chopper circuit based power converters, a novel passive cooling system integrated into the transformer structure, and controls to ensure the device would operate with high reliability in the field, despite always changing grid conditions. Controlled voltage output from the converters is injected into the low voltage end of the transformer’s secondary windings. Challenges the team addressed during the project included the design of sequences for system start-up and shutdown, fail-normal functionality enabled by a series switch located around the entire system, and a full passive cooling system with no moving parts. In early laboratory testing, the team demonstrated the ability to inject phase-controlled voltages up to 250 VAC (about 3.5%) in series with a 3-phase, 12.47 kV line carrying 1 MVA.

Following successful laboratory tests, one of the prototype power flow controllers was installed in the field on the Southern Co. power system in Georgia, where the prototype provides a controlled inter-tie between two, previously-isolated, 12.47 kV radial distribution feeders. Thus far, the prototype power flow controller has been tested over a 600 kVA range and startup/shutdown sequences have been verified. In open loop testing, line power has been controlled from -376 kW to 224 kW.  Ultimately, the controller could be used by utilities to balance the demands placed on transformers at substation transformers providing power to different feeders. This installation test is particularly significant because it demonstrates how low-cost power electronic devices can be used to achieve mesh interconnection of radial feeders. Meshing of the distribution system gives consumers access to multiple power sources through multiple paths, making it possible to maintain service to many customers even under fault conditions. The new technology also presents new challenges, such as providing protection for a network with multiple power sources.

Varentec's power flow controller has been successfully demonstrated at distribution power levels, where the potential value could be created by enabling the mesh interconnection of multiple, previously isolated, radial distribution feeders. The value of such a scheme includes possible savings through deferred distribution system upgrade costs, and also includes intangibles that are difficult to evaluate in dollar terms, such as improved availability of service through reduced outages.

Varentec’s approach, if successfully scaled up for application at transmission level voltage and power levels, could provide considerable value in a variety of transmission system applications for controllability of a meshed grid, even under current regulatory and market practices. At the simplest level, the ability to change real and reactive power flows in a specific transmission or sub-transmission line can mitigate congestion by allowing power flow on alternate paths where there is spare capacity. Simulations of power system operations have indicated that the ability to change power flows under a contingency, such as a line trip, could have a dramatic impact on the need to build additional system capacity.

The ability to dynamically control power flows on the grid can enhance asset utilization by adaptively reconfiguring the transmission system according to changing conditions. Previous system simulations conducted at Georgia Tech indicated that such enhanced capability can reduce the need for new asset construction, potentially reducing T&D investments by as much as 80%.[1],[2]

Over time, implementation of power routing capability on the grid will improve the economic efficiency of wholesale markets. The policies and regulations underlying electricity markets today were written with the assumption that power cannot be stored or routed. With the new capabilities enabled by power flow devices such as Varentec’s CD-PAR, power system optimization will become much more efficient and operators will be empowered with new options to ensure reliability. This could have profound effects on the choices of market participants and lead to dramatically reduced costs.

As of April 2016, the Varentec team has reported two invention disclosures to ARPA-E and two U.S. Patent and Trademark Office (PTO) patent applications. The team has also published the scientific underpinnings of this technology in two articles: