Advanced energy storage promises to play a key role in the modernization of our nation’s electricity grid. While relatively little storage is deployed on today’s grid, future grid development will likely require energy storage that not only enables the integration of increasing amounts of renewables, but also improves the grid’s operating capabilities, enhances reliability, allows deferral of infrastructure investments and provides backup power during emergencies. When the Grid-Scale Rampable Intermittent Dispatchable Storage (GRIDS) program was deployed in 2010, so few grid storage systems were installed that cost data was often sparse and highly variable. However, the Electric Power Research Institute (EPRI) reported in 2010 that costs of all-vanadium redox flow battery systems (200kW-1.2MW, 3.5 hour duration) were $910-$1,250/kWh, while Lithium (Li)-ion battery systems with similar duration cost $950-$1,900. To expand the benefits of energy storage for the grid, the GRIDS program estimated that ten-fold reduction in cost below the 2010 levels was required.

Redox flow batteries are particularly attractive for grid storage because the amount of stored energy, important for large capacity applications, can be scaled independently of the battery’s power level. Flow batteries store energy in liquid electrolytes that are pumped from storage tanks through a cell stack during charging and discharging. Maintaining electrolyte stability over many cycles has been a barrier in flow-cell development, with all-vanadium flow batteries proving one of the most effective solutions. However, vanadium flow batteries have required expensive ion-exchange membrane, carbon electrodes, and bipolar plates that can account for as much as 40% of the total system cost. The understanding of fluid flow in electrochemical cells has been significantly improved by extensive research in fuel cells, providing new opportunities to improve design and lower costs for flow-cell batteries. 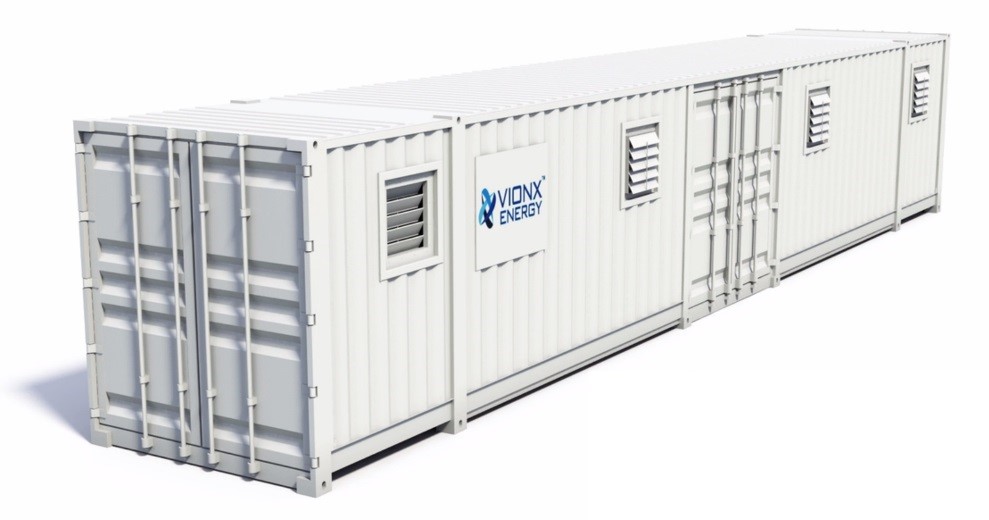 UTRC’s successful development of a high-power stack enabled a 2 times greater reduction in cost (which makes it competitive with today’s lithium-ion-based storage systems) while also offering a lifetime of greater than 7,500 cycles.

As of November 2015, UTRC licensed its high-power all-vanadium system to Vionx Energy. The company has containerized 65kW/400kWh energy storage units for sale. Vionx deployed its first unit to the U.S. Army at Fort Devens, Massachusetts in 2015.  Vionx is collecting data based on 160 kW to 500 kW systems in the field and will use this data to determine future market opportunities.

Vionx has raised tens of millions of dollars to further develop and deploy the all-vanadium battery technology developed by UTRC in its ARPA-E project. This funding comes from an investor group led by Starwood Energy and Vantage Point Capital Partners.

UTRC’s development of a high-power all-vanadium battery is a significant demonstration in the ability to advance energy storage to the lower costs and higher performance needed both for first market applications in micro-grids, and for longer term, larger scale applications. These advances in battery technology provide a pathway to reduce cost and to demonstrate and quantify their value in providing grid services. With increasing production scale, continuing development of lower-cost cell components and eletrolyte formulas, UTRC is positioned to remain competitive in the rapidly developing grid storage market.

As of February 2016, the UTRC team’s project has resulted in four subject invention disclosures and three U.S. patent applications. The UTRC team has also published eight scientific papers about flow cell batteries. A list of the publications is provided below.

Darling, R. and Perry, M. (2014). The Influence of Electrode and Channel Configurations on Flow Battery Performance, Journal of the Electrochemical Society, volume 161(9), p.A1381.