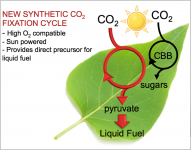 Biofuels offer renewable alternatives to petroleum-based fuels that reduce net greenhouse gas emissions to nearly zero. However, traditional biofuels production is limited not only by the small amount of solar energy that plants convert through photosynthesis into biological materials, but also by inefficient processes for converting these biological materials into fuels. Farm-ready, non-food crops are needed that produce fuels or fuel-like precursors at significantly lower costs with significantly higher productivity. To make biofuels cost-competitive with petroleum-based fuels, biofuels production costs must be cut in half.

The University of California, Los Angeles (UCLA) is redesigning the carbon fixation pathways of plants to make them more efficient at capturing the energy in sunlight. Carbon fixation is the key process that plants use to convert carbon dioxide (CO2) from the atmosphere into higher energy molecules (such as sugars) using energy from the sun. UCLA is addressing the inefficiency of the process through an alternative biochemical pathway that uses 50% less energy than the pathway used by all land plants. In addition, instead of producing sugars, UCLA's designer pathway will produce pyruvate, the precursor of choice for a wide variety of liquid fuels. Theoretically, the new biochemical pathway will allow a plant to capture 200% as much CO2 using the same amount of light. The pathways will first be tested on model photosynthetic organisms and later incorporated into other plants, thus dramatically improving the productivity of both food and fuel crops.

If successful, UCLA's project would increase the capacity of plants to capture energy from sunlight, allowing plants like switchgrass to produce more fuel using the same amount of energy.

The transportation sector accounts for nearly all of our petroleum imports. Providing an advanced biofuels alternative to petroleum will allow the U.S. to reduce these imports, improving our energy independence.

The U.S. imports nearly $1 billion in petroleum each day, accounting for the single largest factor in our trade balance with the rest of the world. Biofuels can be produced domestically, allowing us to keep more dollars at home.