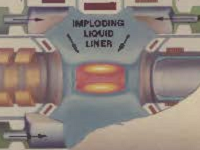 Fusion energy holds the promise of virtually limitless, clean power production. Although fusion has been demonstrated in the laboratory, scientists have been unable to successfully harness it as a power source due to complex scientific and technological challenges and the high cost of research. Most fusion research focuses on magnetic confinement (low plasma density) or inertial confinement (high plasma density), but hybrid approaches with intermediate densities, such as magneto-inertial fusion (MIF), could cost less because of their reduced size, energy, power density requirements. In MIF, an imploding shell called a liner compresses magnetically insulated plasma fuel, causing its nuclei to fuse. A device called a driver is used to deliver an immense amount of energy to the liner, imploding it and bringing the fuel to the high temperatures and pressures required for fusion. Attaining these fusion conditions is a very difficult technical challenge. Additionally, many current experimental techniques are destructive, meaning that pieces of the experimental set up are destroyed with each experiment and need to be replaced, adding to the cost and time required for research.

NumerEx will develop a Stabilized Liner Compressor (SLC) which uses a liquid metal liner for non-destructive experimentation and operation, meaning the liner implosion is quickly repeatable. The SLC uses a rotating chamber, in which liquid metal is formed into a hollow cylinder. The liquid is pushed by pistons driven by high-pressure gas, collapsing the inner surface around a target on the axis. The rotation of the liquid liner avoids instabilities that would otherwise occur during compression of the plasma. After each experiment, the liquid liner can flow back to its original position for subsequent implosion. In the NumerEx team’s conceptual design for a power plant, the liquid liner acts as a blanket absorbing radiation from fusion reactions, reducing damage to the reactor hardware and creating fusion fuel for future reactor operation. Additionally, energy from the recoil of the liner and piston can be captured and reused, making the power plant design more efficient.

NumerEx’s innovation could accelerate the development of cost-effective fusion reactors, which could provide a nearly limitless supply of domestic power and eliminate dependence on foreign sources of energy.